Kids Encyclopedia Facts
This page is about the city. For the adjacent town, see Brookfield (town), Wisconsin.

Brookfield is located west of Milwaukee in Waukesha County in an area originally inhabited by Potawatomi Indians. The first known white settler was Robert Curren who built the first log cabin in 1836. Farms dominated the landscape into the mid-20th century.

The City of Brookfield was incorporated on August 14, 1954 from the Town of Brookfield, a portion of which still survives along the city's western edge.

According to the United States Census Bureau, the city has a total area of 27.59 square miles (71.46 km2), of which 27.09 square miles (70.16 km2) is land and 0.50 square miles (1.29 km2) is water. The sub-continental divide passes through Brookfield; on the eastern side of this divide, easily marked by the crest at Calhoun Road and Capitol Drive, water flows to Lake Michigan on its way to the Gulf of Saint Lawrence; on the western side of this divide, water flows to the Fox River of Illinois and Wisconsin on its way to the Mississippi River and the Gulf of Mexico.

There is a heron rookery on a site northwest of Capitol Drive and Brookfield Road. 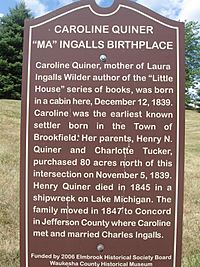 Brookfield Square is the main shopping mall for the city and also serves as a commercial anchor to the Blue Mound Road shopping district serving the western suburbs of Milwaukee and Waukesha County. Brookfield has off-road bike paths throughout the city.

Brookfield Days is held annually in June, at Wirth Park supported by the local community. A farmers market runs on weekends in summer months at the Brookfield City Hall.

The Elmbrook Historical Society hosts several events annually celebrating the lives of early Brookfield settlers, including Caroline Ingalls, who was born in the Brookfield area. The city is often visited by fans of her daughter, Laura, author of the Little House on the Prairie book series.

Brookfield has one sister city:

Fiserv is headquartered in Brookfield. The firm provides financial services technology (software, for the most part) for banks, thrifts, credit unions, securities broker dealers, leasing and finance companies, and retailers, among others. Its 2016 revenue was approximately $5.5 billion.

All content from Kiddle encyclopedia articles (including the article images and facts) can be freely used under Attribution-ShareAlike license, unless stated otherwise. Cite this article:
Brookfield, Wisconsin Facts for Kids. Kiddle Encyclopedia.