Shorewood is a village in Milwaukee County, Wisconsin, United States. The population was 13,859 at the 2020 census.

Nestled between the Milwaukee River and Lake Michigan, Shorewood is bordered by the City of Milwaukee to the south and west and Whitefish Bay to the north. According to the United States Census Bureau, the village has a total area of 1.59 square miles (4.12 km2), all of it land.

Shorewood originally seceded from the Town of Milwaukee in 1900 and was known as East Milwaukee until changing to its present name in 1917.

There were 6,381 households, of which 23.2% had children under the age of 18 living with them, 38.0% were married couples living together, 7.6% had a female householder with no husband present, 3.0% had a male householder with no wife present, and 51.3% were non-families. 39.0% of all households were made up of individuals, and 11.5% had someone living alone who was 65 years of age or older. The average household size was 2.06 and the average family size was 2.83. 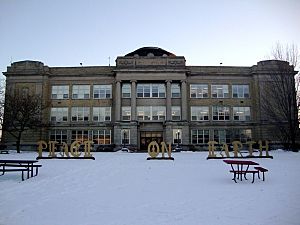 The first building of Shorewood High School's multi-building campus was constructed in 1925.

The Archdiocese of Milwaukee maintains one Catholic school in Shorewood, St. Robert School, which serves kindergarten through grade 8.

All content from Kiddle encyclopedia articles (including the article images and facts) can be freely used under Attribution-ShareAlike license, unless stated otherwise. Cite this article:
Shorewood, Wisconsin Facts for Kids. Kiddle Encyclopedia.