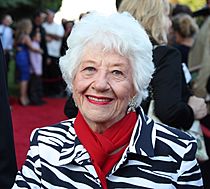 Charlotte Rae (born Charlotte Rae Lubotsky; April 22, 1926 – August 5, 2018) was an American actress, comedian, singer, and dancer who was known for her role as Edna Garrett in Diff'rent Strokes and in The Facts of Life. She was nominated for an Emmy Award for Best Actress in a Comedy in 1982.

Rae was born on April 22, 1926 in Milwaukee, Wisconsin to Jewish-Russian parents. She was raised in Milwaukee and in Shorewood, Wisconsin. Rae studied at Shorewood High School and at Northwestern University. She was married to John Strauss from 1951 until they divorced. They had two children.

All content from Kiddle encyclopedia articles (including the article images and facts) can be freely used under Attribution-ShareAlike license, unless stated otherwise. Cite this article:
Charlotte Rae Facts for Kids. Kiddle Encyclopedia.