101 Dalmatians: The Series facts for kids 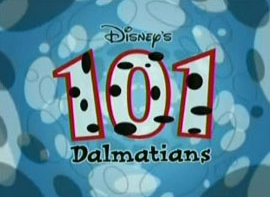 101 Dalmatians is an animated Disney television series. Is based on the One Hundred and One Dalmatians movie. The series was originally shown from September 1, 1997 to March 4, 1998 in first run syndication and on ABC's One Saturday Morning lineup. It had a total of 65 episodes.

The main characters in the series are Lucky, Cadpig, Rolly, and Spot. Lucky is the most adventurous of the 99 puppies and is unique in having his only spots in the shape of a horseshoe on his back. Cadpig is another runt of the litter and the smallest of the 99 puppies but quite possibly the most intelligent, if not deluded. She is unique in having long floppy ears, a big head, a kind personality, and she's also quite strong for her size. Rolly is the very hungry one. Almost all his decisions are based on food and this, at times, gets him and the pups into trouble. He is, however, a loyal and helpful sibling, especially when it comes to his incredible sense of smell. Spot is a chicken who wants to become a Dalmatian. She is a voice of reason for the foursome but, more often than not, is ignored. She is easily frightened and is prone to literally bouncing off the walls. She is, however, a good dancer (which has to count for something, according to her) and appears to be good at math. She is also able to fly. Patch appears in the series in his look from the Dodie Smith novel; he appears to be more laid-back unlike his movie counterpart. Dipstick retains a bit of his movie look; he is portrayed as dimwitted but loyal. Wizzer changed quite a bit from his movie look, being smaller and with white ears and a red collar. He follows Mooch's orders without question and is still prone to having accidents as in the live-action movie. Two-Tone changed quite a bit from her movie appearance, now having two black ears, a gold hoop earring in her right ear, a chubby body, a blue collar instead of pink, and a lower black body with white spots. She was Mooch's girlfriend and second in command of his gang until she dated Lucky in "Love 'Em and Flea 'Em." Since then, Two-Tone has gone off on her own.

The main villains in the series are Cruella de Vil and her henchmen, Horace and Jasper. Cruella is now a corporate criminal and most of her plans revolve around getting richer, tormenting the Dalmatians, and plotting to steal the Dearly Farm. Horace and Jasper are usually hired to perform her plans, usually failing.

All content from Kiddle encyclopedia articles (including the article images and facts) can be freely used under Attribution-ShareAlike license, unless stated otherwise. Cite this article:
101 Dalmatians: The Series Facts for Kids. Kiddle Encyclopedia.