Stéphane Mallarmé ( mal-AR-may 18 March 1842 – 9 September 1898), pen name of Étienne Mallarmé, was a French poet and critic. He was a major French symbolist poet, and his work anticipated and inspired several revolutionary artistic schools of the early 20th century, such as Cubism, Futurism, Dadaism, and Surrealism.

Stéphane Mallarmé was born in Paris. He was a boarder at the Pensionnat des Frères des écoles chrétiennes à Passy between 6 or 9 October 1852 and March 1855. He worked as an English teacher and spent much of his life in relative poverty but was famed for his salons, occasional gatherings of intellectuals at his house on the rue de Rome for discussions of poetry, art and philosophy. The group became known as les Mardistes, because they met on Tuesdays (in French, mardi), and through it Mallarmé exerted considerable influence on the work of a generation of writers. For many years, those sessions, where Mallarmé held court as judge, jester, and king, were considered the heart of Paris intellectual life. Regular visitors included W.B. Yeats, Rainer Maria Rilke, Paul Valéry, Stefan George, Paul Verlaine, and many others.

Along with other members of La Revue Blanche such as Jules Renard, Julien Benda and Ioannis Psycharis, Mallarmé was a Dreyfusard. 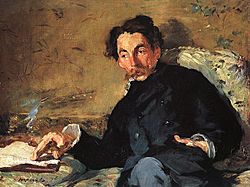 Mallarmé's earlier work owes a great deal to the style of Charles Baudelaire who was recognised as the forerunner of literary Symbolism. Mallarmé's later fin de siècle style, on the other hand, anticipates many of the fusions between poetry and the other arts that were to blossom in the next century. Most of this later work explored the relationship between content and form, between the text and the arrangement of words and spaces on the page. This is particularly evident in his last major poem, Un coup de dés jamais n'abolira le hasard ('A roll of the dice will never abolish chance') of 1897.

Some consider Mallarmé one of the French poets most difficult to translate into English. The difficulty is due in part to the complex, multilayered nature of much of his work, but also to the important role that the sound of the words, rather than their meaning, plays in his poetry. When recited in French, his poems allow alternative meanings which are not evident on reading the work on the page. For example, Mallarmé's Sonnet en '-yx' opens with the phrase ses purs ongles ('her pure nails'), whose first syllables when spoken aloud sound very similar to the words c'est pur son ('it's pure sound'). Indeed, the 'pure sound' aspect of his poetry has been the subject of musical analysis and has inspired musical compositions. These phonetic ambiguities are very difficult to reproduce in a translation which must be faithful to the meaning of the words. 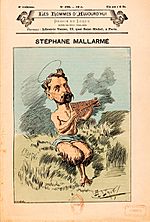 Stéphane Mallarmé as a faun, cover of the literary magazine Les hommes d'aujourd'hui, 1887.

Mallarmé is referred to extensively in the latter section of Joris-Karl Huysmans' À rebours, where Des Esseintes describes his fervour-infused enthusiasm for the poet: "These were Mallarmé's masterpieces and also ranked among the masterpieces of prose poetry, for they combined a style so magnificently that in itself it was as soothing as a melancholy incantation, an intoxicating melody, with irresistibly suggestive thoughts, the soul-throbs of a sensitive artist whose quivering nerves vibrate with an intensity that fills you with a painful ecstasy." [p. 198, Robert Baldick translation]

The critic and translator Barbara Johnson has emphasized Mallarmé's influence on twentieth-century French criticism and theory: "It was largely by learning the lesson of Mallarmé that critics like Roland Barthes came to speak of 'the death of the author' in the making of literature. Rather than seeing the text as the emanation of an individual author's intentions, structuralists and deconstructors followed the paths and patterns of the linguistic signifier, paying new attention to syntax, spacing, intertextuality, sound, semantics, etymology, and even individual letters. The theoretical styles of Jacques Derrida, Julia Kristeva, Maurice Blanchot, and especially Jacques Lacan also owe a great deal to Mallarmé's 'critical poem.'" 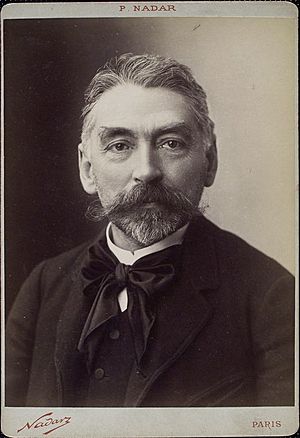 It has been suggested that "much of Mallarmé's work influenced the conception of hypertext, with his purposeful use of blank space and careful placement of words on the page, allowing multiple non-linear readings of the text. This becomes very apparent in his work Un coup de dés."

On the publishing of "Un Coup de Dés" and its mishaps after the death of Mallarmé, consult the notes and commentary of Bertrand Marchal for his edition of the complete works of Mallarmé, Volume 1, Bibliothèque de la Pléiade, Gallimard 1998. To delve more deeply, consult "Igitur, Divagations, Un Coup de Dés," edited by Bertrand Marchal with a preface by Yves Bonnefoy, nfr Poésie/Gallimard.

In 1990, Greenhouse Review Press published D. J. Waldie's American translation of Un Coup de Dés in a letterpress edition of 60 copies, its typography and format based on examination of the final (or near final) corrected proofs of the poem in the collection of Harvard's Houghton Library.

Prior to 2004, Un Coup de Dés was never published in the typography and format conceived by Mallarmé. In 2004, 90 copies on vellum of a new edition were published by Michel Pierson et Ptyx. This edition reconstructs the typography originally designed by Mallarmé for the projected Vollard edition in 1897 and which was abandoned after the sudden death of the author in 1898. All the pages are printed in the format (38 cm by 28 cm) and in the typography chosen by the author. The reconstruction has been made from the proofs which are kept in the Bibliothèque Nationale de France, taking into account the written corrections and wishes of Mallarmé and correcting certain errors on the part of the printers Firmin-Didot.

A copy of this new edition can be consulted in the Bibliothèque François-Mitterrand. Copies have been acquired by the Bibliothèque littéraire Jacques-Doucet and University of California - Irvine, as well as by private collectors. A copy has been placed in the Museum Stéphane Mallarmé at Vulaines-sur-Seine, Valvins, where Mallarmé lived and died and where, according to Paul Valéry, he made his final corrections on the proofs prior to the projected printing of the poem.

In 2012, the French philosopher Quentin Meillassoux published The Number and the Siren, a rigorous attempt at 'deciphering' the poem on the basis of a unique interpretation of the phrase 'the unique Number, which cannot be another.'

In 2018, Apple Pie Editions published un coup de des jamais n'abolira le hasard: translations by Eric Zboya, an English edition that transforms the poem not only through erasure, but through graphic imaging software.

All content from Kiddle encyclopedia articles (including the article images and facts) can be freely used under Attribution-ShareAlike license, unless stated otherwise. Cite this article:
Stéphane Mallarmé Facts for Kids. Kiddle Encyclopedia.