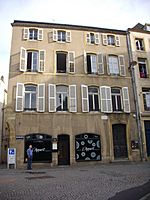 The House of Verlaine, Verlaine's birthplace in Metz, today a museum dedicated to the poet's life and artwork

Paul-Marie Verlaine ( 30 March 1844 – 8 January 1896) was a French poet associated with the Symbolist movement and the Decadent movement. He is considered one of the greatest representatives of the fin de siècle in international and French poetry.

All content from Kiddle encyclopedia articles (including the article images and facts) can be freely used under Attribution-ShareAlike license, unless stated otherwise. Cite this article:
Paul Verlaine Facts for Kids. Kiddle Encyclopedia.