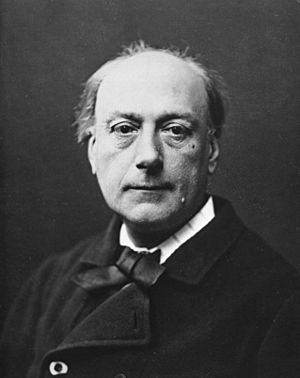 Théodore Faullain de Banville (14 March 1823 – 13 March 1891) was a French poet and writer. His work was influential on the Symbolist movement in French literature in the late 19th century.

Banville was born in Moulins in Allier, Auvergne, the son of a captain in the French navy. His boyhood, by his own account, was cheerlessly passed at a lycée in Paris; he was not harshly treated, but took no part in the amusements of his companions. On leaving school with but slender means of support, he devoted himself to letters, and in 1842 published his first volume of verse (Les Cariatides), which was followed by Les Stalactites in 1846. The poems encountered some adverse criticism, but secured for their author the approbation and friendship of Alfred de Vigny and Jules Janin.

From then on, Banville's life was steadily devoted to literary production and criticism. He printed other volumes of verse, among which the Odes funambulesques (1857) received unstinted praise from Victor Hugo, to whom they were dedicated. Later, several comedies in verse were produced at the Théâtre Français and on other stages; and from 1853 onwards a stream of prose flowed from his industrious pen, including studies of Parisian manners, sketches of well-known persons, and a series of tales, most of which were republished in his collected works (1875–1878). He also wrote freely for reviews, and acted as dramatic critic for more than one newspaper. Throughout a life spent mainly in Paris, Banville's genial character and cultivated mind won him the friendship of the chief men of letters of his time. 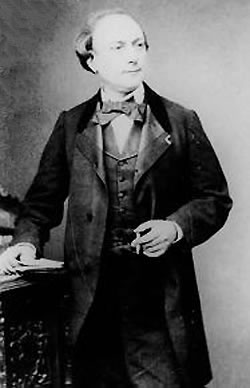 All content from Kiddle encyclopedia articles (including the article images and facts) can be freely used under Attribution-ShareAlike license, unless stated otherwise. Cite this article:
Théodore de Banville Facts for Kids. Kiddle Encyclopedia.