Vigny was born in Loches (a town to which he never returned) into an aristocratic family. His father was a 60-year-old veteran of the Seven Years' War who died before Vigny's 20th birthday; his mother, 20 years younger, was a strong-willed woman who was inspired by Rousseau and took personal responsibility for Vigny's early education. His maternal grandfather, the Marquis de Baraudin, had served as commodore in the royal navy.

Vigny grew up in Paris, and took preparatory studies for the École Polytechnique at the Lycée Bonaparte, obtaining a good knowledge of French history and the Bible before developing an "inordinate love for the glory of bearing arms".

As was the case for every noble family, the French Revolution diminished the family's circumstances considerably. After Napoléon's defeat at Waterloo, a Bourbon, Louis XVIII, the brother of Louis XVI, was restored to power, and in 1814 Vigny enrolled in one of the privileged aristocratic companies of the Maison du Roi (king's guard) as a second lieutenant. 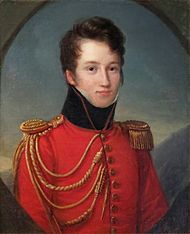 Though he was promoted to first lieutenant in 1822 and to captain the following year, the military profession in time of peace bored him. After taking several leaves of absence he abandoned military life in 1827, having already published his first poem Le Bal in 1820 and an ambitious narrative poem Éloa in 1824 on the popular romantic theme of the redemption of Satan.

Prolonging successive leaves from the army, he settled in Paris with his young English bride Lydia Bunbury, whom he married in Pau in 1825. He collected his recent works in January 1826 in Poèmes antiques et modernes. Three months later he published the first important historical novel in French, Cinq-Mars, based on the life of Louis XIII's favorite Henri Coiffier de Ruzé, Marquis of Cinq-Mars, who conspired against the Cardinal de Richelieu. With the success of these two volumes, Vigny seemed to be the rising star of the Romantic movement, though one of Vigny's best friends, Victor Hugo, soon usurped that role. Vigny wrote of Hugo: "The Victor I loved is no more... now he likes to make saucy remarks and is turning into a liberal, which does not suit him." Unlike Hugo and Alphonse de Lamartine, who moved gradually to the center and then to the left during the 1830s, Vigny remained pliantly centrist in his politics: he accepted the July monarchy, at first welcomed and then rejected the Second French Republic, and then supported Napoleon III. Vigny later denounced members of his inner circle whom he suspected of republican sympathies to the imperial police. 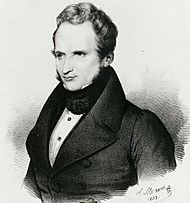 The visit of an English theater troupe to Paris in 1827 revived French interest in Shakespeare. Vigny worked with Emile Deschamps on a translation of Romeo and Juliet. In 1831 he presented his first original play, La Maréchale d'Ancre, a historical drama recounting the events leading up to the reign of King Louis XIII. Attending the theater, he met the great actress Marie Dorval, and became her jealous lover until 1838. (Vigny's wife had become a near invalid and never learned to speak French fluently; they had no children, and Vigny was also disappointed when his father-in-law's remarriage deprived the couple of an anticipated inheritance.)

In 1835 Vigny produced a drama titled Chatterton, based on the life of Thomas Chatterton, with Marie Dorval starring as Kitty Bell. Chatterton is considered to be one of the best of the French romantic dramas and is still performed regularly. The story of Chatterton had inspired one of the three episodes of Vigny's philosophical novel Stello (1832), in which he examined the relationship of poetry to society and concluded that the poet, doomed to be regarded with suspicion in every social order, must remain somewhat aloof and apart from the social order. Servitude et grandeur militaires (1835) was a similar tripartite meditation on the condition of the soldier. 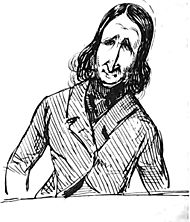 Although Vigny gained success as a writer, his personal life was not happy. His marriage was a disappointment; his relationship with Marie Dorval was plagued by jealousy; and his literary talent was eclipsed by the achievements of others. He grew embittered. After the death of his mother in 1838 he inherited the property of Maine-Giraud, near Angoulême, where it was said that he had withdrawn to his 'ivory tower' (an expression Sainte-Beuve coined with reference to Vigny). There Vigny wrote some of his most famous poems, including La Mort du loup and La Maison du berger. Proust regarded La Maison du berger as the greatest French poem of the 19th century. In 1845, after several unsuccessful attempts to be elected, Vigny became a member of the Académie française. 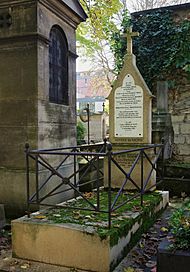 Tomb of Alfred de Vigny, his mother and his wife at Montmartre cemetery, Paris.

In later years, Vigny ceased to publish. He continued to write, however, and his Journal is considered by modern scholars to be a great work in its own right, though it awaits a definitive scholarly edition. Vigny considered himself a thinker as well as a literary author; he was, for example, one of the first French writers to take a serious interest in Buddhism. His own philosophy of life was pessimistic and stoical, but celebrated human fraternity, the growth of knowledge, and mutual assistance as high values. He was the first in literary history to use the word spleen in the sense of woe, grief, gall, descriptive of the condition of the soul of modern man. In his later years he spent much time preparing the posthumous collection of poems now known as Les Destinées, for which his intended title was Poèmes philosophiques. It concludes with Vigny's final message to the world, L'Esprit pur.

Vigny developed what is believed to have been stomach cancer in his early sixties. He endured its torments with exemplary stoicism for several years: A voir ce que l'on fut sur terre et ce qu'on laisse/Seul le silence est grand ; tout le reste est faiblesse. ('When we see what we were on Earth and what we leave behind/Only silence is great; everything else is weakness.') Vigny died in Paris on 17 September 1863, a few months after the death of his wife. He was buried beside her in the Cimetière de Montmartre in Paris. Several of his works were published posthumously.

All content from Kiddle encyclopedia articles (including the article images and facts) can be freely used under Attribution-ShareAlike license, unless stated otherwise. Cite this article:
Alfred de Vigny Facts for Kids. Kiddle Encyclopedia.