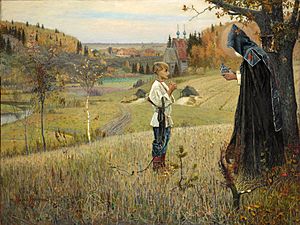 Mikhail Nesterov's The Vision of the Youth Bartholomew. This legendary work inaugurated the Symbolist movement in Russian painting. 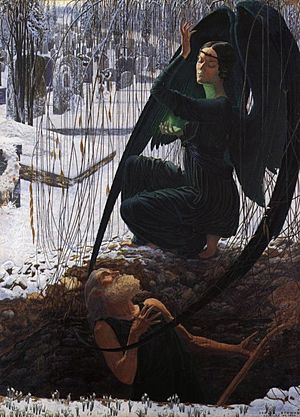 La mort du fossoyeur ("The death of the gravedigger") by Carlos Schwabe is a visual compendium of symbolist motifs. Death and angels, pristine snow, and the dramatic poses express symbolist longings for transfiguration "anywhere, out of the world".

Symbolism was a late 19th-century art movement of French, Russian and Belgian origin. The movement rejected realism and naturalism, and included poetry and other arts. Symbolists believed that art should represent absolute truths that could only be described indirectly. Thus a symbolist painting may look realistic, but actually it represents a non-visual idea.

In literature, the style started with the publication Les Fleurs du mal (The Flowers of Evil, 1857) by Charles Baudelaire. The works of Edgar Allan Poe, which Baudelaire admired greatly and translated into French, were a significant influence and the source of many stock tropes and images. The name "symbolist" itself was first used by the critic Jean Moréas, who invented it to distinguish the symbolists from similar styles of literature and art. Symbolism in art is related to the gothic component of Romanticism.[1]

The symbolist painters used mythological and dream imagery. The symbols used by symbolism are not the familiar emblems of mainstream iconography but intensely personal, private, obscure and ambiguous references. More a philosophy than an actual style of art, symbolism in painting influenced the contemporary Art Nouveau style and Les Nabis.

All content from Kiddle encyclopedia articles (including the article images and facts) can be freely used under Attribution-ShareAlike license, unless stated otherwise. Cite this article:
Symbolism (art) Facts for Kids. Kiddle Encyclopedia.