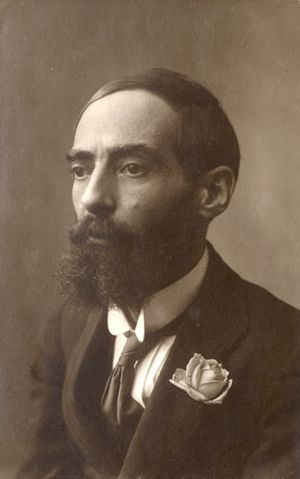 Camilo Pessanha (1867-1926) was a Portuguese poet. He is regarded as the most important representative of symbolism in Portuguese literature.

Camilo de Almeida Pessanha was born in Coimbra on 7 September 1867. His parents were Francisco António de Almeida Pessanha and Maria do Espírito Santo Duarte Nunes Pereira. He studied law at the university of Coimbra. After finishing his studies he went to Macao, a Portuguese town in China. He worked as a teacher there. Pessanha became interested in Chinese culture. He learned Chinese. He died in Macao on 1 March 1926. His death may have been caused by the poet's opium habit.

Camilo Pessanha is the author of only one poetic book. It is named Clépsidra and was published in 1922. He also wrote some books about Chinese culture. He collected some works of art in China. He translated some classic Chinese poems, too. Pessanha's works influenced Fernando Pessoa's poetry. He wrote chiefly sonnets.

All content from Kiddle encyclopedia articles (including the article images and facts) can be freely used under Attribution-ShareAlike license, unless stated otherwise. Cite this article:
Camilo Pessanha Facts for Kids. Kiddle Encyclopedia.