James Sidney Edouard, Baron Ensor (13 April 1860 – 19 November 1949) was a Flemish-Belgian painter and printmaker, an important influence on expressionism and surrealism who lived in Ostend for almost his entire life. He was associated with the artistic group Les XX.

From 1877 to 1880, he attended the Académie Royale des Beaux-Arts in Brussels. His only travels were three brief trips to Paris, London, and Holland.

In 1895 his painting The Lamp Boy (1880) was acquired by the Royal Museums of Fine Arts of Belgium in Brussels. He had his first solo exhibition in Brussels. By 1920 he was the subject of major exhibitions. In 1929 he was named a Baron by King Albert. 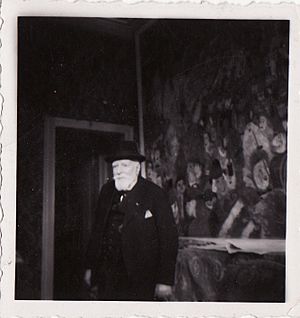 Ensor in front of "Entry of Christ into Brussels" in his house in Ostend, 1940s

James Ensor’s famous work can be identified with subjects such as: carnivals, masks, puppetry, skeletons, and fantastic allegories. These subjects were used to portray themes such as human dignity and the social condition.

The four years between 1888 and 1892 mark a turning point in James Ensor’s work. In 1888 alone, Ensor etched forty-three prints. His etchings and paintings were full of technical discovery. Ensor created a format in which he could paint with complete freedom.

Ensor created one of his most well known works in 1888. The Entry of Christ into Brussels is one of Jame’s Ensor most well known pieces. The piece expresses his concern for the social condition.

Against the advice of friends, he remained in Ostend during World War II despite the risk of bombardment. In his old age he was an honored figure among Belgians. His daily walk made him a familiar sight in Ostend. He died there after a short illness, on 19 November 1949.

All content from Kiddle encyclopedia articles (including the article images and facts) can be freely used under Attribution-ShareAlike license, unless stated otherwise. Cite this article:
James Ensor Facts for Kids. Kiddle Encyclopedia.