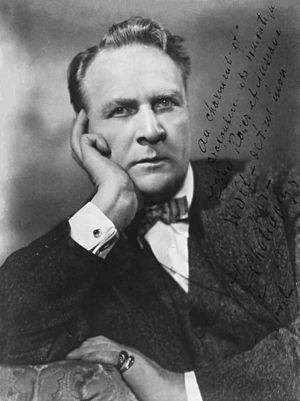 During the first phase of his career, Chaliapin endured direct competition from three other great basses: the powerful Lev Sibiriakov [ru; uk; pl; ca] (1869–1942), the more lyrical Vladimir Kastorsky [Wikidata] (1871–1948), and Dmitri Buchtoyarov (1866–1918), whose voice was intermediate between those of Sibiriakov and Kastorsky. The fact that Chaliapin is far and away the best remembered of this magnificent quartet of rival basses is a testament to the power of his personality, the acuteness of his musical interpretations, and the vividness of his performances.

All content from Kiddle encyclopedia articles (including the article images and facts) can be freely used under Attribution-ShareAlike license, unless stated otherwise. Cite this article:
Feodor Chaliapin Facts for Kids. Kiddle Encyclopedia.