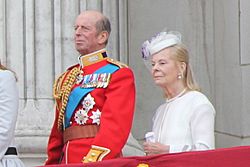 Prince Edward, Duke of Kent, KG, GCMG, GCVO, CD, ADC(P) (Edward George Nicholas Paul Patrick; born 9 October 1935) is a member of the British royal family. He is a first cousin of Queen Elizabeth II through their fathers, Prince George, Duke of Kent, and King George VI, who were brothers. He has held the title of Duke of Kent since the death of his father in a plane crash in 1942.

The Duke of Kent carries out engagements on behalf of the Queen. He is president of the All England Lawn Tennis and Croquet Club, presenting the trophies to the Wimbledon champion and runner-up, and served as the United Kingdom's Special Representative for International Trade and Investment, retiring in 2001. He is president of The Scout Association, the Royal United Services Institute, and the Royal Institution of Great Britain, and since 1967 Grand Master of the United Grand Lodge of England. He is also patron of the Institute of Advanced Motorists, an independent road safety charity which specialises in training and advice for post-licence drivers and riders.

Since his mother, Princess Marina of Greece and Denmark, was a cousin of Prince Philip, Duke of Edinburgh, Edward is both a second cousin and first cousin once removed to Prince Charles and his siblings.

All content from Kiddle encyclopedia articles (including the article images and facts) can be freely used under Attribution-ShareAlike license, unless stated otherwise. Cite this article:
Prince Edward, Duke of Kent Facts for Kids. Kiddle Encyclopedia.