It is the city's central business district and a major hub for businesses of all sectors in the Northern Australia region.

Waterfront in the CBD

Townsville City is home to many regional offices of various government organisations as well as many private companies, serving as a hub for northern Queensland. There has been extensive construction in the city centre over the last 20 years. These include a major redevelopment on Flinders Street Mall by Jarrod McCracken's construction company and the construction of the North Queensland Cowboys Leagues Club.

Townsville's skyline will change dramatically in as little as 5 years with many projects planned and under construction for the Central Business District (CBD) and Palmer Street. Planning and property experts are now predicting Townsville will have the largest city by size and skyscraper numbers in northern Australia by 2012.

In 2008, the council committed approximately $60 million on upgrading the Flinders Mall and the CBD with renovations concluding in 2011. A major development of the plan is the addition of a 6-storey shopping centre known as Flinders Plaza Shopping Centre which currently is in a state of contention as its primary developers have gone into receivership.

The changing skyline of Townsville highlights the Growth within the CBD. Many cranes dot the CBD which represents the staggering investment into the city 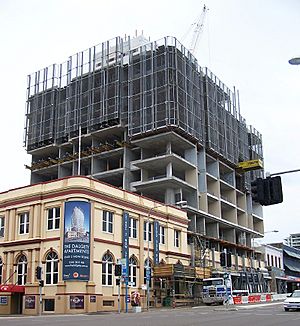 Townsville CBD has a large number of heritage-listed sites.

All content from Kiddle encyclopedia articles (including the article images and facts) can be freely used under Attribution-ShareAlike license, unless stated otherwise. Cite this article:
Townsville City, Queensland Facts for Kids. Kiddle Encyclopedia.