Irwin achieved worldwide fame from the television series The Crocodile Hunter (1996–2007), an internationally broadcast wildlife documentary series that he co-hosted with his wife Terri. The couple also hosted the series Croc Files (1999–2001), The Crocodile Hunter Diaries (2002–2006), and New Breed Vets (2005).

They also co-owned and operated Australia Zoo, founded by Irwin's parents in Beerwah, about 80 kilometres (50 mi) north of the Queensland state capital of Brisbane.

Irwin died on 4 September 2006 after being pierced in the chest by a stingray barb while filming in Australia's Great Barrier Reef. His death became international news and was met with expressions of shock and grief by fans, the media, governments, non-profit organizations, and other celebrities.

Numerous parks, zoos, streets, and an asteroid have been named in his honour. The Sea Shepherd Conservation Society named its island-class patrol vessel MY Steve Irwin after Irwin.

His widow Terri Irwin, with whom he had two children, continues to operate Australia Zoo.

Irwin was born on his mother's birthday to Lyn and Bob Irwin in Upper Ferntree Gully, a suburb of Melbourne.

He moved with his parents as a child to Queensland in 1970, where he attended Landsborough State School and Caloundra State High School.

Irwin described his father as a wildlife expert interested in herpetology, while his mother Lyn was a wildlife rehabilitator.

After moving to Queensland, Bob and Lyn Irwin started the small Queensland Reptile and Fauna Park, where Steve grew up around crocodiles and other reptiles.

Irwin became involved with the park in a number of ways, including taking part in daily animal feeding, as well as care and maintenance activities.

On his sixth birthday, he was given a 12-foot (4 m) scrub python. He began handling crocodiles at the age of nine after his father had educated him on reptiles from an early age. Also at age nine, he wrestled his first crocodile, again under his father's supervision.

He worked as a volunteer for Queensland's East Coast Crocodile Management program and captured over 100 crocodiles, some of which were relocated, while others were housed at the family park. Irwin took over the management of the park in 1991 and renamed it Australia Zoo in 1998. 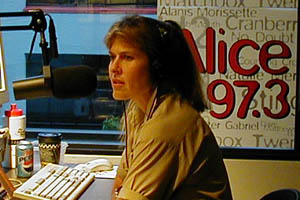 In 1991, Irwin met Terri Raines, an American naturalist from Eugene, Oregon, who was visiting wildlife rehabilitation facilities in Australia and had decided to visit the zoo. According to the couple, it was love at first sight. They were engaged four months later and were married in Eugene on 4 June 1992.

The Crocodile Hunter and related work 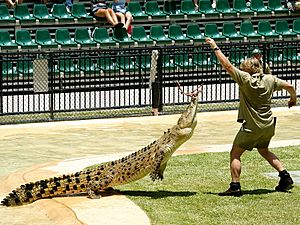 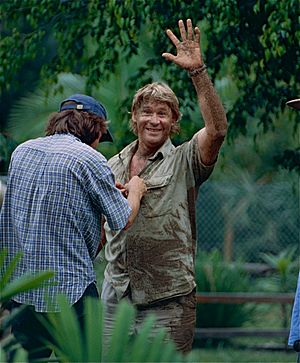 Steve and Terri spent their honeymoon trapping crocodiles together. Film footage of their honeymoon, taken by John Stainton, became the first episode of The Crocodile Hunter.

The series debuted on Australian TV screens in 1996 and made its way onto North American television the following year. The Crocodile Hunter became successful in the United States, the UK, and over 130 other countries, reaching 500 million people. Irwin's exuberant and enthusiastic presenting style, broad Australian accent, signature khaki shorts, and catchphrase "Crikey!" became known worldwide.

Irwin went on to star in other Animal Planet documentaries, including Croc Files, The Crocodile Hunter Diaries, and New Breed Vets.

Other television and film work 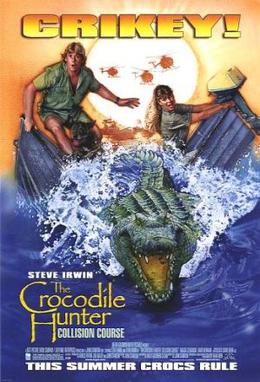 US Theatrical release poster of The Crocodile Hunter: Collision Course

In 1998, Irwin continued, working with director Mark Strickson, to present The Ten Deadliest Snakes in the World. He appeared on several episodes of The Tonight Show with Jay Leno. A 2000 FedEx commercial with Irwin lightheartedly dealt with the possibility of occupational death from snakebite and the fanciful notion that FedEx would have saved him, if only FedEx were used.

Under Irwin's leadership, the operations grew to include the zoo, the television series, the Steve Irwin Conservation Foundation (later renamed Wildlife Warriors), and the International Crocodile Rescue.

Improvements to the Australia Zoo include the Animal Planet Crocoseum, the rainforest aviary and Tiger Temple. Irwin mentioned that he was considering opening an Australia Zoo in Las Vegas, Nevada, and possibly at other sites around the world.

In 2001, Irwin appeared in a cameo role in the Eddie Murphy film Dr. Dolittle 2, in which an alligator warns Dolittle that he knows Irwin is going to grab him and is prepared to attack when he does, but Dolittle fails to warn Irwin in time.

Irwin's only starring feature film role was in 2002's The Crocodile Hunter: Collision Course, which was released to mixed reviews. The film won the Best Family Feature Film award for a comedy film at the Young Artist Awards.

In 2002, Irwin and his family appeared in the Wiggles video/DVD release Wiggly Safari, which was set in Australia Zoo and featured singing and dancing inspired by Australian wildlife.

Irwin fronted an advertising campaign for The Ghan in 2003, a passenger train operating between Adelaide, Alice Springs, and Darwin. A Pacific National NR class locomotive was named Steve Irwin as part of the campaign.

Irwin provided his voice for the 2006 animated film Happy Feet, as an elephant seal named Trev. The film was dedicated to Irwin, as he died during post-production.

Irwin died on 4 September 2006 after being pierced in the chest by a stingray barb while snorkeling in the Great Barrier Reef.He died from the wound. At the time, Irwin was being recorded for a television show, The Ocean's Deadliest. 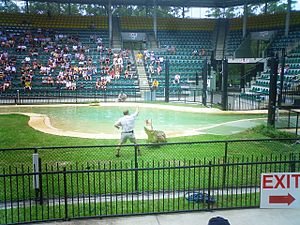 The "Crocoseum" at Australia Zoo, where Steve Irwin's memorial service was held.

Family and friends of Irwin held a private funeral service in Caloundra on 9 September 2006. Irwin was buried in a private ceremony at Australia Zoo later that same day; the grave site is inaccessible to the zoo's visitors.

On 20 September, a public memorial service, introduced by Russell Crowe, was held in Australia Zoo's 5,500-seat Crocoseum; this service was broadcast live throughout Australia, the United States, the UK, Germany, and Asia, and it is estimated to have been seen by over 300 million viewers worldwide.

The memorial included remarks by Prime Minister Howard; Irwin's father Bob and daughter Bindi; his associates Wes Mannion and John Stainton; and celebrities from Australia and around the world. Anthony Field of The Wiggles partly hosted the service, often sharing the screen with various animals, from koalas to elephants. Australian music star John Williamson sang "True Blue", which was Irwin's favourite song. In a symbolic finish to the service, Irwin's truck was loaded up with gear and driven out of the arena for the last time as Williamson sang. As a final tribute, Australia Zoo staff spelled out Irwin's catchphrase "Crikey" in yellow flowers as Irwin's truck was driven from the Crocoseum for the last time to end the service.

On 1 January 2007, Glass House Mountains Road, the road that runs by the Australia Zoo, was officially renamed Steve Irwin Way. Later that year the Australian government announced that a 135,000-hectare (334,000-acre) national park was being created in northern Queensland and would be named the Steve Irwin Wildlife Reserve. An asteroid discovered in 2001 has been named 57567 Crikey, in honour of Irwin and his "signature phrase".

All content from Kiddle encyclopedia articles (including the article images and facts) can be freely used under Attribution-ShareAlike license, unless stated otherwise. Cite this article:
Steve Irwin Facts for Kids. Kiddle Encyclopedia.