Irwin's turtle (Elseya irwini) is a rare species of freshwater turtle in the family Chelidae. The species is endemic to Australia, originating from the lower region of the Burdekin River area.

Steve Irwin and his father Bob Irwin, spotted a specimen of E. irwini on a crocodile catching trip on the Burdekin river in 1990. They had never seen it before. "Co-discoverer", famed zoologist and TV personality, Steve Irwin took pictures and sent them to turtle-expert John Cann who verified that it was indeed a new species. This new species was then named after the father and son duo. 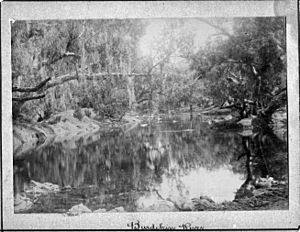 E. irwini, like some other turtles, can breathe underwater by taking water into its cloaca. The cloaca is a cavity at the end of the digestive tract containing a chamber with gill-like structures which allow for the diffusion of oxygen . Without this structure, this species of turtle would not be able to stay under water for long periods of time. Irwin's turtle needs to live in a source of water that is plentiful with oxygen. If the water has low oxygen levels or is filled with contaminants, the turtle has a lower chance of survival.

All content from Kiddle encyclopedia articles (including the article images and facts) can be freely used under Attribution-ShareAlike license, unless stated otherwise. Cite this article:
Irwin's turtle Facts for Kids. Kiddle Encyclopedia.