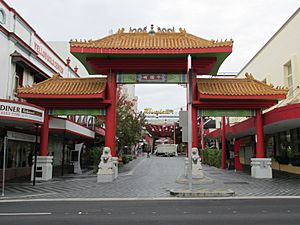 Chinatown is a precinct in Fortitude Valley, Brisbane, Australia. It is centered on Chinatown Mall, a pedestrian street which occupies all of Duncan Street. The Mall runs parallel to Brunswick Street Mall, and connects Wickham Street and Ann Street. The precinct is the location of Chinese restaurants and shops, and is the venue for events including Chinese New Year and Valley Fiesta. Street signs in the area are written in both English and Chinese. It is also home to many restaurants offering Chinese, Korean, Indonesian, Japanese, Thai and Vietnamese cuisines. Its pan-Asian nature is also emphasized through the hosting of many Asian festivals including the annual Indian festival, Diwali.

Chinatown's popularity with Chinese Australians has declined in the past two decades, and Sunnybank is instead seen as the hub of Chinese culture in Brisbane.

Chinatown Mall was officially opened by Lord Mayor Sallyanne Atkinson on 29 January 1987, the first day of the Year of the Rabbit. The Mall was designed by architects and engineers from Guangzhou, and was intended to reflect Tang architecture.

In 1995 part of Jackie Chan's First Strike (1996) was shot in the Mall. The scene featured a car chase and an explosion. The Mall's pagoda was destroyed during filming and subsequently rebuilt.

Brisbane City Council began a renovation of Chinatown Mall in 2009. The project, which was designed by Urbis, cost $8,000,000. The Mall was supposed to be finished by September 2009 but was delayed, reopening on 14 February 2010.

All content from Kiddle encyclopedia articles (including the article images and facts) can be freely used under Attribution-ShareAlike license, unless stated otherwise. Cite this article:
Chinatown, Brisbane Facts for Kids. Kiddle Encyclopedia.