The town's name is derived from Moonie River, which was first recorded as Mooni by Sir Thomas Mitchell in November 1846 when he passed through the region.

The town has a public school, service station, the Moonie Sports Club and a motel. 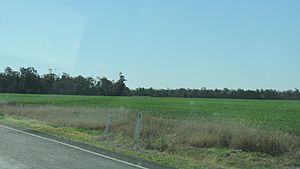 In December 1961 Moonie was the site of Australia's first commercial oil field, a very small field consisting of less than one percent of Australia's oil and gas reserves. The oil field is still operational and pumps out 35 kilolitres (7,700 gallons) every day.

The region is also an agricultural area that produces grain, beef cattle and prime lambs.

All content from Kiddle encyclopedia articles (including the article images and facts) can be freely used under Attribution-ShareAlike license, unless stated otherwise. Cite this article:
Moonie, Queensland Facts for Kids. Kiddle Encyclopedia.