Breakwater under construction in Ystad 2019 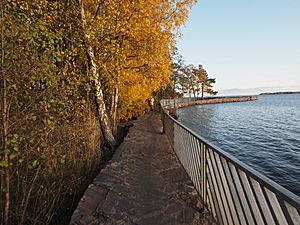 A breakwater in Haukilahti, Espoo, Finland.

Breakwaters are structures constructed near the coasts as part of coastal management or to protect an anchorage from the effects of both weather and longshore drift. 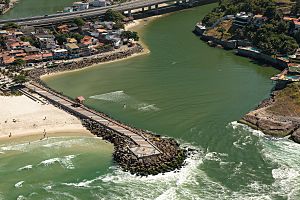 An anchorage is only safe if ships anchored there are protected from the force of powerful waves by some large structure which they can shelter behind. Natural harbours are formed by such barriers as headlands or reefs. Artificial harbours can be created with the help of breakwaters. Mobile harbours, such as the D-Day Mulberry harbours, were floated into position and acted as breakwaters. Some natural harbours, such as those in Plymouth Sound, Portland Harbour, and Cherbourg, have been enhanced or extended by breakwaters made of rock.

A breakwater structure is designed to absorb the energy of the waves that hit it, either by using mass (e.g., with caissons), or by using a revetment slope (e.g., with rock or concrete armour units).

Rubble mound breakwaters use structural voids to dissipate the wave energy. Rubble mound breakwaters consist of piles of stones more or less sorted according to their unit weight: smaller stones for the core and larger stones as an armour layer protecting the core from wave attack. Rock or concrete armour units on the outside of the structure absorb most of the energy, while gravels or sands prevent the wave energy's continuing through the breakwater core. The slopes of the revetment are typically between 1:1 and 1:2, depending upon the materials used. In shallow water, revetment breakwaters are usually relatively inexpensive. As water depth increases, the material requirements—and hence costs—increase significantly.

Caisson breakwaters typically have vertical sides and are usually erected where it is desirable to berth one or more vessels on the inner face of the breakwater. They use the mass of the caisson and the fill within it to resist the overturning forces applied by waves hitting them. They are relatively expensive to construct in shallow water, but in deeper sites they can offer a significant saving over revetment breakwaters.

An additional rubble mound is sometimes placed in front of the vertical structure in order to absorb wave energy and thus reduce wave reflection and horizontal wave pressure on the vertical wall. Such a design provides additional protection on the sea side and a quay wall on the inner side of the breakwater, but it can enhance wave overtopping.

A similar but more sophisticated concept is a wave-absorbing caisson, including various types of perforation in the front wall.

Such structures have been used successfully in the offshore oil-industry, but also on coastal projects requiring rather low-crested structures, e.g. on an urban promenade where the sea view is an important aspect like in Beirut and Monaco. In the latter, a project is presently ongoing at the Anse du Portier including 18 wave-absorbing 27 m high caissons.

Wave attenuators consist of concrete elements properly dimensioned placed horizontally just one feet under the free surface, positioned along a line parallel to the coast. The wave attenuator has four sea-side (seaward) slabs, one vertical slab, and two rear-side (landward) slabs, each separated from the next by a space of 200 millimetres (7.9 in). This row of 4 front side slabs and two rear side slabs, reflects the offshore wave by the action of the volume of water located under it which, made to oscillate under the effect of the incident wave, creates waves in phase opposition to the incident wave downstream from the slabs.

All content from Kiddle encyclopedia articles (including the article images and facts) can be freely used under Attribution-ShareAlike license, unless stated otherwise. Cite this article:
Breakwater Facts for Kids. Kiddle Encyclopedia.