Deception Bay is a suburb in the Moreton Bay Region, Queensland, Australia. It is approximately 32 kilometres (20 mi) north of Brisbane CBD in the south-eastern corner of the bay of the same name which separates the Redcliffe Peninsula and Bribie Island.

The suburb of Deception Bay takes its name from a small bay in the west of Moreton Bay, south of Pumicestone Passage and north of the Redcliffe Peninsula. In the north of the bay at Beachmere is where the Caboolture River and Burpengary Creek meet the ocean. It was named in 1823 by Lt John Oxley, who thought the bay was a river and because of his mistake and the shallowness, named it Pumice Stone River; he later changed the name to Deception Bay.

The name Deception Bay is often abbreviated to D-Bay. The suburb acquired a negative reputation due to crime and high unemployment during the 1980s and 1990s as it was populated with one of the most concentrated social housing in Queensland by the government of the day. However community problems subsided after 2001 due to development and population growth in the area. Despite this, some residents would still prefer to see the name changed to avoid any negative perceptions.

The area was once large parcels of land supporting dairying and farming and, while some large blocks remain today, most have been subdivided to provide housing for a growing community. 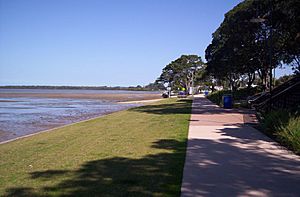 In the past few years, the beachfront area has received a major re-design, under the urban renewal programme of the Queensland Government. The suburb also contains a new development area, North Rise. Bayswater Resort is a resort currently under construction in the Moreton Downs Estate. Neighbouring suburbs include Rothwell, Narangba and North Lakes.

A notable resident of Deception Bay was Dr Joseph Bancroft, a pioneer in experimenting in native plants for their health properties and, through his meatworks, in the preservation of meat, fish and vegetables. His son, Thomas, carried on the tradition with some work in cultivating cotton and castor oil. A rough-hewn pyramidal block of granite stands today on the foreshore highlighting the achievements of these two doctors, and the streets around Dr Bancroft's home, Joseph Street and Bancroft Terrace, are named in his honour.

On 15 March 2008, Deception Bay became a suburb of a new super council, Moreton Bay Region. Deception Bay divided into two divisions, with the area of the suburb falling north of Deception Bay Road becoming a part of Division 2. 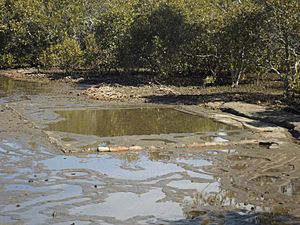 Fisheries Bath, one of the Deception Bay Sea Baths, 2016

Deception Bay has a number of heritage-listed sites, including:

All content from Kiddle encyclopedia articles (including the article images and facts) can be freely used under Attribution-ShareAlike license, unless stated otherwise. Cite this article:
Deception Bay, Queensland Facts for Kids. Kiddle Encyclopedia.