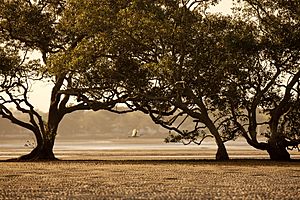 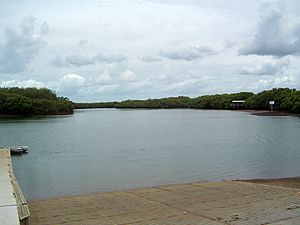 Cabbage Tree Creek marks the northern border of the reserve, 2010 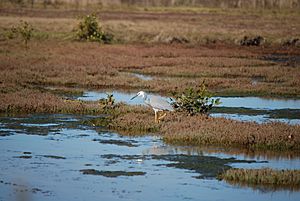 The Boondall Wetlands lie on the edge of Moreton Bay in the Brisbane suburb of Boondall between Nudgee Beach and Shorncliffe, in south-east Queensland, Australia. The wetlands are preserved within the Boondall Wetlands Reserve which was preserved in 1990 and covers more than 1100 hectares of internationally significant wetlands.

The Boondall Wetlands are Brisbane's largest wetlands. They became protected under the Ramsar Convention on 22 October 1993. The northern boundary is marked by Cabbage Tree Creek and the Kedron Brook floodway marks the southern limits of the wetlands. Nudgee Creek and the Gateway Motorway both pass through the wetlands, with the latter providing road access to the Boondall Wetlands Environment Centre. Facilities in the park includes elevated walkways, bikeways and bird watching platforms.

The wetlands support a diversity of wildlife, including invertebrates, fish, reptiles, amphibians, mammals and more than 190 species of birds. Many of the birds are international migratory shorebirds which breed during the northern summer months in Arctic regions, making Boondall Wetlands globally important for these long-distance visitors. The wetlands form part of the Moreton Bay and Pumicestone Passage Important Bird Area.

Camping in not permitted in the reserve. There is a visitor information centre and walking tracks, including a boardwalk through mangroves. There is a bird hide on Nundah Creek and a boat ramp on Nudgee Beach Road.

All content from Kiddle encyclopedia articles (including the article images and facts) can be freely used under Attribution-ShareAlike license, unless stated otherwise. Cite this article:
Boondall Wetlands Facts for Kids. Kiddle Encyclopedia.