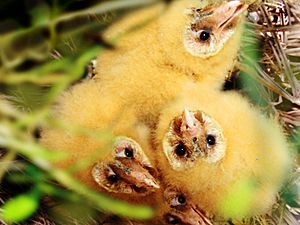 The eastern grass owl (Tyto longimembris), also known as Chinese grass owl or Australian grass owl, is a species of owl in the family Tytonidae. They feed predominantly on small rodents.

Though some authorities consider this owl to be conspecific with the African grass owl, T. capensis, other consider it to be a valid species.

The eastern grass owl's primary call is like many other tyto owls. A loud, hissing screech but the grass owl's screech is louder than a barn owl's but quieter than a masked owl's.

Studies in parts of Australia have shown that the most common prey is the long-haired rat and the cane rat. Prey are detected from on the wing. The owl uses its long legs to penetrate dense ground cover and seize its prey.

This owl prefers tall grasslands and swamps. Roost areas consist of flattened vegetation within systems of "tunnels" through the swamp vegetation. Nesting is in similar situations.

Eastern grass owls live in eastern, southern and southeast Asia, parts of New Guinea, Australia (mainly in Queensland) and the western Pacific. It has also been found in the coastal islands.[where?]

All content from Kiddle encyclopedia articles (including the article images and facts) can be freely used under Attribution-ShareAlike license, unless stated otherwise. Cite this article:
Eastern grass owl Facts for Kids. Kiddle Encyclopedia.