The River Derwent is a river located in Tasmania, Australia. It is also known by the palawa kani name timtumili minanya. The river rises in the state's Central Highlands at Lake St Clair, and descends more than 700 metres (2,300 ft) over a distance of more than 200 kilometres (120 mi), flowing through Hobart, the state's capital city, before emptying into Storm Bay and flowing into the Tasman Sea. The banks of the Derwent were once covered by forests and occupied by Tasmanian Aborigines. European settlers farmed the area and during the 20th century many dams were built on its tributaries for the generation of hydro-electricity.

Agriculture, forestry, hydropower generation and fish hatcheries dominate catchment land use. The Derwent is also an important source of water for irrigation and water supply. Most of Hobart's water supply is taken from the lower River Derwent. Nearly 40% of Tasmania's population lives around the estuary's margins and the Derwent is widely used for recreation, boating, recreational fishing, marine transportation and industry.

The River Derwent valley was inhabited by the Mouheneener people for at least 8,000 years before British settlement. Evidence of their occupation is found in many middens along the banks of the river. In 1793, John Hayes named it after the River Derwent, which runs past his birthplace of Bridekirk, Cumberland.

When first explored by Europeans, the lower parts of the valley were clad in thick she-oak forests, remnants of which remain in various parts of the lower foreshore.

There was a thriving whaling industry until the 1840s when the industry rapidly declined due to over-exploitation.

Formed by the confluence of the Narcissus and Cuvier rivers within Lake St Clair, the Derwent flows generally southeast over a distance of 187 kilometres (116 mi) to New Norfolk and the estuary portion extends a further 52 kilometres (32 mi) out to the Tasman Sea. Flows average in range from 50 to 140 cubic metres per second (1,800 to 4,900 cu ft/s) and the mean annual flow is 90 cubic metres per second (3,200 cu ft/s).

The large estuary forms the Port of the City of Hobart – often claimed to be the deepest sheltered harbour in the Southern Hemisphere; some past guests of the port include HMS Beagle in February 1836, carrying Charles Darwin; the USS Enterprise; and USS Missouri. The largest vessel to ever travel the Derwent is the 113,000-tonne (111,000-long-ton), 61-metre (200 ft) high, ocean liner Diamond Princess, which made her first visit in January 2006.

At points in its lower reaches the river is nearly 3 kilometres (1.9 mi) wide, and as such is the widest river in Tasmania.

Until the construction of several hydro-electric dams between 1934 and 1968, the river was prone to flooding. Now there are more than twenty dams and reservoirs used for the generation of hydro-electricity on the Derwent and its tributaries, including the Clyde, Dee, Jordan, Nive, Ouse, Plenty and Styx rivers. Seven lakes have been formed by damming the Derwent and the Nive rivers for hydroelectric purposes and include the Meadowbank, Cluny, Repulse, Catagunya, Wayatinah, Liapootah and King William lakes or lagoons.

The Upper Derwent is affected by agricultural run-off, particularly from land clearing and forestry. The Lower Derwent suffers from high levels of heavy metal contamination in sediments. The Tasmanian Government-backed Derwent Estuary Program has commented that the levels of mercury, lead, zinc and cadmium in the river exceed national guidelines. In 2015 the program recommended against consuming shellfish and cautioned against consuming fish in general. Nutrient levels in the Derwent between 2010 and 2015 increased in the upper estuary (between Bridgewater and New Norfolk) where there had been algal blooms.

A large proportion of the heavy metal contamination has come from major industries that discharge into the river including the former Electrolytic Zinc and now Nyrstar smelter at Lutana established in 1916, and a paper mill at Boyer which opened in 1941.

The Derwent adjoins or flows through the Pittwater–Orielton Lagoon, Interlaken Lakeside Reserve and Goulds Lagoon, all wetlands of significance protected under the Ramsar Convention. 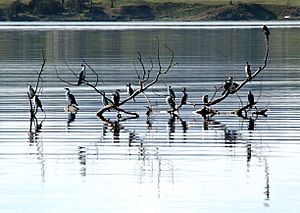 In recent years, southern right whales finally started making appearance in the river during months in winter and spring when their migration takes place. Some females even started using calm waters of the river as a safe ground for giving birth to their calves and would stay over following weeks after disappearance of almost 200 years due to being wiped out by intense whaling activities. In the winter months of 2014, humpback whales and a minke whale (being the first confirmed record of this species in the river) have been recorded feeding in the River Derwent for the first time since the whaling days of the 1800s.

Several bridges connect the western shore (the more heavily populated side of the river) to the eastern shore of Hobart – in the greater Hobart area, these include the five lane Tasman Bridge, near the CBD, just north of the port; the four lane Bowen Bridge; and the two lane Bridgewater Bridge and Causeway. Until 1964 the Derwent was crossed by the unique Hobart Bridge, a floating concrete structure just upstream from where the Tasman Bridge now stands.

Travelling further north from the Bridgewater crossing, the next crossing point is New Norfolk Bridge, slightly north of the point where the Derwent reverts from seawater to fresh water, Bushy Park, Upper Meadowbank Lake, Lake Repulse Road, Wayatinah, and the most northerly crossing is at Derwent Bridge, before the river reaches its source of Lake St Clair. At the Derwent Bridge crossing, the flow of the river is generally narrow enough to be stepped across.

The River Derwent (facing south), at the Bridgewater causeway

The River Derwent as seen from Poimenna Reserve, Austins Ferry

All content from Kiddle encyclopedia articles (including the article images and facts) can be freely used under Attribution-ShareAlike license, unless stated otherwise. Cite this article:
River Derwent (Tasmania) Facts for Kids. Kiddle Encyclopedia.