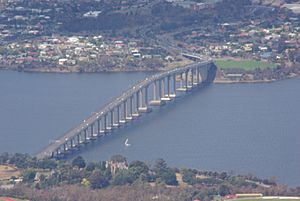 The Tasman Bridge is a five-lane bridge which crosses the Derwent River, near the central business district of Hobart, Tasmania. The bridge replaced a 1943 floating concrete bridge which had a liftable middle section to allow ships to pass through. Work began on the Tasman Bridge in April 1960, and it was finished on 23 December, 1964. It was officially opened by the Duke of Gloucester on 18 March, 1965. It was named after Abel Tasman, the Dutch explorer who was the first European to visit Tasmania in 1642.

On 5 January, 1975, a ship, the SS Lake Illawarra, carrying 10,000 tons of zinc concentrate crashed into the bridge. This caused two of the columns and three spans of the bridge to collapse into the river. The ship sank quickly in the deep water. Four cars fell into the river killing five people, and seven members of the ship's crew were also killed. Several cars were able to stop, with their front wheels hanging over the edge.

The collapse of the bridge left people living on the east bank of the Derwent with a 50km drive to get into the city. A temporary Bailey bridge was put in place. This was the longest Bailey bridge in the world. The Tasman Bridge was rebuilt and opened again to traffic on 8 October, 1977.

All content from Kiddle encyclopedia articles (including the article images and facts) can be freely used under Attribution-ShareAlike license, unless stated otherwise. Cite this article:
Tasman Bridge Facts for Kids. Kiddle Encyclopedia.