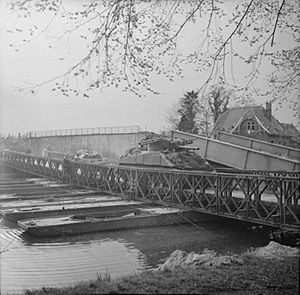 Part of the 1st Coldstream Guards crosses a Bailey bridge over the Dortmund-Ems Canal. The bridge has been built with two layers of side-panels and is supported by pontoons (April 1945)

The Bailey bridge is a factory made truss bridge. It was made in small sections that could be easily moved and put together on site. It was developed by the British during World War II for military use.

A Bailey bridge did not need special tools or heavy equipment to put into place. The wood and steel bridge parts were small and light enough to be carried in trucks and lifted into place by hand. The bridges were strong enough to carry tanks. Bailey bridges continue to be used in building projects and to provide temporary crossings for people and vehicles.

It was designed by a British engineer, Donald Bailey. The British army tested different bridge designs in 1941–1942, including a suspension bridge and a stepped arch bridge. The flat truss bridge was the most successful. An early test model of the Bailey flat truss bridge is still in place over Mother Siller's Channel in Dorset. The Bailey bridge was first used by the army in Tobruk in 1942. The US Army built many of the bridges for use after the D-Day landings in France.

Parts of the bridge 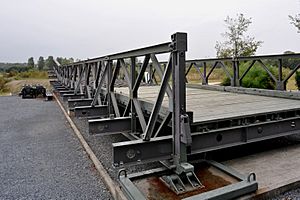 A Bailey bridge section at the „Memorial Pegasus“ museum in Ranville; Calvados, France. The transoms, side–panels and stringers that make up the bridge can be seen.

The basic Bailey bridge is made up of three main parts, the floor, the stringers and the side panels. The floor of the bridge is made up of a number of 19-foot-wide transoms (5.8 m) that run across the bridge. Across the bottom of these, forming a square, are 10-foot-long stringers (3.0 m). The bridge's strength is provided by the panels on the sides. The panels are 10-foot-long (3.0 m), 5-foot-high (1.5 m), cross-braced rectangles. Each weighs 570 pounds (260 kg), and can be lifted by six men.

Each unit built in this way is a single 10-foot-long (3.0 m) section of bridge, with a 12-foot-wide (3.7 m) roadbed. After one section is complete it is pushed forward over rollers on the bridgehead, and another section built behind it. The two are then connected together with pins pounded into holes in the corners of the panels. 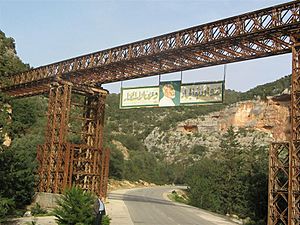 Bailey bridge over the Wadi el Kuf, Libya. Bailey bridge sections have also been used to construct the supports. 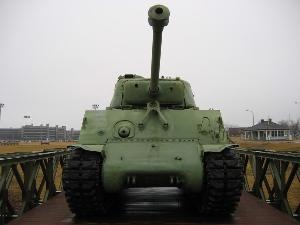 Bailey bridges are in regular use throughout the world. Some examples include:

The Skylark launch tower at Woomera was built up of Bailey bridge parts.

All content from Kiddle encyclopedia articles (including the article images and facts) can be freely used under Attribution-ShareAlike license, unless stated otherwise. Cite this article:
Bailey bridge Facts for Kids. Kiddle Encyclopedia.