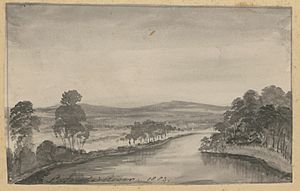 The Latrobe River rises below Dick Hill, from the southern slopes of the Baw Baw plateau, part of the Great Dividing Range, between Powelltown and Noojee where it shares a watershed with the Little Yarra River, in a state forestry area. The river flows generally in an easterly direction, then south, and then east again through the Latrobe Valley, joined by seventeen tributaries including the Ada, Toorongo, Loch, Tanjil, Morwell, Tyers, and Thomson rivers, before reaching its mouth in Lake Wellington east of Sale where it forms its confluence with the Avon. It then goes to flow out of Lake Wellington and into Lake Victoria, Within Lake Victoria, south of Bairnsdale, the river forms its confluence with the Forge Creek and Mitchell River and empties into Bass Strait southwest of Lakes Entrance in the Shire of East Gippsland. The river descends 764 metres (2,507 ft) over its 270-kilometre (170 mi) course.

The Latrobe River flows through Lake Narracan, a storage reservoir near Newborough built to supply cooling water for the nearby brown coal fired power stations, and through Lake Victoria before emptying into the Bass Strait. In its upper reaches, the Latrobe River flows adjacent to the Noojee Streamside Reserve and the Tyers Streamside Reserve. As the river reaches its mouth, it flows adjacent to The Lakes National Park and the Gippsland Lakes Coastal Park.

Major road crossings of the river, from upstream to downstream, are located on the Yarra Junction-Noojee Road east of Powelltown; the Mount Baw Baw Road east of Noojee; the Willowgrove Road south of Willow Grove; the Moe-Rawson Road north of Moe; the Moe-Glengarry Road west of Yallourn North; and the Princes Highway north of Rosedale.

In the Australian Aboriginal Brataualung language the river is given two names, Durt'yowan, meaning "finger"; and Tanjil, with no defined meaning.

The Australian Government Gazetteer lists the name of the watercourse as La Trobe River and the river is sometimes spelled as LaTrobe River; meanwhile the Victorian Government Registrar of Geographic Names list the name as Latrobe River.

All content from Kiddle encyclopedia articles (including the article images and facts) can be freely used under Attribution-ShareAlike license, unless stated otherwise. Cite this article:
Latrobe River Facts for Kids. Kiddle Encyclopedia.