The Latrobe Valley is an inland geographical district and urban area of the Gippsland region in the state of Victoria, Australia. The traditional owners are the Brayakaulung of the Gunai nation. The district lies east of Melbourne and nestled between the Strzelecki Ranges to the south and the Baw Baw Ranges, part of the Great Dividing Range, to the north. Mount St Phillack (1,567 m (5,141 ft)) is the highest peak to the north of the Latrobe Valley, due north of Moe. The highest peak to the south is Mt Tassie (740 m (2,430 ft)), south of Traralgon.

The area has three major centres, from west to east, Moe, Morwell and Traralgon, with minor centres including Churchill, Yinnar, Glengarry, and Tyers. The population of the Latrobe Valley is approximately 125,000.

The valley draws its name from the Latrobe River which flows eastward, through the valley. According to Les Blake, in 1841 William Adams Brodribb, an early settler, named the river in honour of Charles La Trobe, Lieutenant Governor of the Port Phillip District. A. W. Reed also attributes Brodribb to naming the river in honour of La Trobe; yet Reed claims that the river was discovered by Angus McMillan in 1840 who named the watercourse as Glengarry River.

While the Latrobe River flows into Lake Wellington to the east of Sale and includes in its drainage basin a significant part of central Gippsland, the region conventionally known as the Latrobe Valley occupies an inland area between the Strzelecki Ranges and Baw Baw Ranges between Drouin and Rosedale - with four major urban areas Warragul, Moe, Morwell and Traralgon, between the Strzelecki Ranges to the south and the westernmost reaches of the Victorian Alps to the north.

Temperatures on Mount Baw Baw, to the north of Moe, generally peak around 10 to 12 °C (18 to 22 °F) cooler than the major urban areas during the day.

There are three major population centres in the Latrobe Valley, all located within the City of Latrobe local government area:

The primary hospital is the Latrobe Regional Hospital located on the Princes Highway between Morwell and Traralgon.

The Princes Freeway runs through Latrobe Valley, bypassing most major rural cities and connecting the region to both Melbourne and East Gippsland. The centrally located centre of Moe is approximately 1 hour and 30 minutes drive from the central business district of Melbourne.

Latrobe Valley Airport (IATA: LTB, ICAO: YLTV) is located in the Latrobe Valley approximately two hours east of Melbourne, off Princes Highway, on the west side of Traralgon.

Logging is also an important industry in the hills to the north and south, with a major paper mill located at Maryvale, near Morwell. In the rugged north of the region is located the historic gold-mining town of Walhalla, amid mountains forming the west of Alpine National Park and nearby Baw Baw National Park, which includes a small winter ski resort. 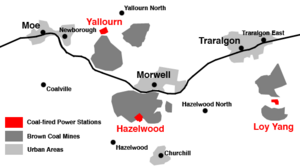 A map of major urban areas, coal-fired power stations and mines in the Latrobe Valley area. 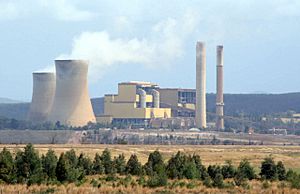 The Gippsland Power Football Club logo in the TAC Cup Under 18s. 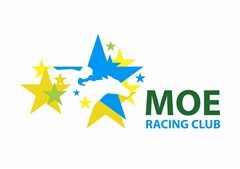 The Moe Racing Club schedules around fourteen race meetings a year. The racecourse is in Waterloo Road within a very short walk of the Moe central business district and V/Line train station. Raceday race calling can be heard in the central business district of Moe during race meetings. The two largest race meeting in Moe are the GPG Mobil Moe Cup meeting in mid October – which is one of the largest regional race meetings outside of Melbourne on the Victorian Racing calendar – and the Melbourne Cup Day meeting on the first Tuesday in November. The Moe Racing Club is the largest capacity racecourse in Gippsland. The club also offers members and guests other facilities, including Turfside Tabaret, the Turfside Bistro and the Turfside Function Centre.

There are a large number of golf courses in the Latrobe Valley area within an approximate 35 km radius of Moe. They include the Moe Golf Club, nestled next to Lake Narracan, Churchill & Monash Golf Club, which is located near Federation University Campus in Churchill, and Yallourn Golf Club and Yallourn Bowling Club at Newborough.

Within the Latrobe Valley there are also large communities within various other sports associations, including; soccer, basketball, netball, dancing, gymnastics, tennis, swimming and cricket.

The Gippsland campus of Federation University is home to 2,000 on-campus students, 5,000 off-campus students and nearly 400 staff. The campus sits in the Latrobe Valley town of Churchill, 142 kilometres (88 mi) east of Melbourne on 63 hectares (160 acres) of landscaped grounds. The campus offers many undergraduate degrees, and attracts many students from the Latrobe Valley, East and West Gippsland. The Centre for Gippsland Studies is a research and community engagement facility which has conducted research and community outreach since 1985.

The Gippsland Medical School, offering postgraduate entry Bachelor of Medicine / Bachelor of Surgery (MBBS) courses was officially opened by the Federal Minister for Health and Ageing, Nicola Roxon on 5 June 2008, providing students with an opportunity to learn medicine in a rural setting working with rural practitioners. The Gippsland Medical School was subject to some local criticism in 2016 and 2017 when it was revealed that there were only 12 Gippsland-origin students among the cohort of 50 studying medicine at the regional campus. The only direct pathway to the medical degree was through a course offered at Monash University's Melbourne-based Clayton campus, whilst graduates from Federation University in Gippsland were not offered a direct pathway to the degree. Federal Member for Gippsland, Darren Chester, criticised Monash University arguing that: 'We should not be saying to our students who are completing year 12 this year that they have to move to Melbourne to access the Monash graduate medical program when we had an existing pathway in Gippsland.'

All content from Kiddle encyclopedia articles (including the article images and facts) can be freely used under Attribution-ShareAlike license, unless stated otherwise. Cite this article:
Latrobe Valley Facts for Kids. Kiddle Encyclopedia.