The Baw Baw National Park is a national park located on the boundaries between the Central Highlands and Gippsland regions of Victoria, Australia. The 13,530-hectare (33,400-acre) national park is situated approximately 120 kilometres (75 mi) east of Melbourne and 50 kilometres (31 mi) north of the Latrobe Valley. The park contains the Baw-Baw Plateau and borders the Mount Baw Baw Alpine Resort.

Geographically, the Baw-Baw Plateau is a plateau of several peaks that includes Mount Baw Baw, Mount St Gwinear, Mount St Phillack, Mount Erica and Mount Whitelaw; all largely subalpine terrane outcrops of weathered granite boulders dot the plateau with alpine meadows punctuated by stands of snow-gum. Much of the slopes of the plateau within the national park form the catchment area for the Thomson River and the Thomson Reservoir, and the Tanjil and Tyers rivers. 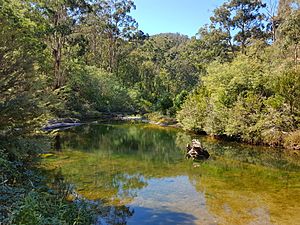 The typical vegetation in the park is low-lying grasses, heathlands and snow gums, this is typically described as sub-alpine. Fauna abounds on the foothills to Baw Baw Plateau, including Leadbeater's possum, which is highly endangered and Victoria's state fauna emblem. The critically endangered Baw Baw frog (Philoria frosti), listed on the IUCN Red List, is native to the region.

The deciduous Baw Baw berry (Wittsteinia vacciniacea) may be found on the plateau.

The major uses of the park are skiing in winter and bushwalking in summer. It is popular for cross country skiing, downhill skiing, summer bushwalking, rafting and canoeing, fishing, scenic drives and picnics. The Australian Alps Walking Track traverses its entire length, starting at Walhalla and continuing north towards the Alpine National Park. The Baw Baw section takes a bit less than three days to walk with plenty to see for those interested in botany or geology.

There is popular ski touring along the Baw Baw Plateau between Mount Baw Baw, past Mount St Phillack to Mount St Gwinear. There is a volunteer ski patrol group who run on weekends and patrol around the St Gwinear portion of the national park. They access the park from the opposite side of the plateau to the ski resort at Mount Baw Baw. Other popular skiing is Nordic skiing at Mount Baw Baw, introduced in 1972 including championship races and a ski school.

All content from Kiddle encyclopedia articles (including the article images and facts) can be freely used under Attribution-ShareAlike license, unless stated otherwise. Cite this article:
Baw Baw National Park Facts for Kids. Kiddle Encyclopedia.