Leadbeater's possum (Gymnobelideus leadbeateri) is an endangered species of Australian possum. Once thought to be extinct, it is now only found in small areas of surviving old and mixed age mountain ash forest in the central highlands of Victoria, Australia, north-east of Melbourne. About half this area was burnt out in the disastrous Black Saturday bushfire in 2009. Large areas of the forest around Marysville, Narbethong and Healesville were destroyed. They need food all year, and trees with holes where they can hide during the day. This limits them to mixed-age wet sclerophyll forest with a thick mid-story of Acacia.

It is the only species in the Gymnobelideus genus. It was named after John Leadbeater, a taxidermist at the Museum of Victoria.

It is the only mammal that is only found in Victoria, so in 1968, the State of Victoria made Leadbeater's possum its faunal emblem.

The possum was first discovered by Europeans in 1867. Only five possums were found, the last one in 1909. It was thought the species was extinct, because its habitat around Bass River in south-west Gippsland was cleared for farming in the early 1900s.

In 1961, a group was discovered near Marysville, in the Upper Yarra Valley. Further searching found more groups in the highlands of Victoria. However, type of forest is critical: it can not be too old or too young.

The possum's survival is believed to be due to the terrible Black Friday fires that burnt through Victoria in 1939. This created a lot of new growth in the forest which provided food. It also left a lot of large dead trees for shelter and nesting. The Leadbeater's possum population grew to about 7500 in the early 1980s. After the 2009 fires it is believed that there are now only about 1000 possums left. Many of the old trees have decayed and there is little new growth. Before European settlement, the possums would simply have moved to new recently burnt areas, but with so much land cleared in the last 100 years, they now have nowhere else to go.

If a population of about 1000 can survive for another 150 years, natural tree hollows will begin to develop in the trees that started growing after the 1939 fires and which survived the 2009 fires. This should help possum numbers start to increase again.

Leadbeater's possums are rarely seen. They sleep during day and come out at night (nocturnal). They are small, about 33 cm (13 in) long and weigh about 120-130 grams. They move very quickly and live at the top of some of the tallest forests in the world. The possum is covered in thick, soft fur. It can be grey through to brown in colour, with a black stripe along their backs. Their fur on the chest and stomach area is pale grey. One of the main features of the possum is its club shaped tail.

They live in small family groups of up to 12 individuals, usually a breeding pair, their children, and sometimes an extra male or two. They sleep together in a nest made out of shredded bark in a tree hollow. The nests can be anywhere from 6 m (20 ft) to 30 m (98 ft) above the ground. They have a territory of up to 20,000 square meters, which they will defend from other possums. The oldest female is the most aggressive. She will attack outsiders and chase her own daughters out of her territory when they become adults at about 14 months of age. The average female lifespan in the bush is only about 27 months, but as much as 10 years in captivity.

Leadbeater's possums do not survive by themselves. Young males leave their parents at about 15 months of age and join another group, or live together in large male groups looking for females to start new groups.

At sunset, Leadbeater's possums leave their nests and go out to find food in the tree tops. They often take huge leaps from tree to tree. They are omnivorous, they eat a range of tree saps, lerps, and arthropods which they find under the loose bark of eucalyptus trees such as spiders, crickets, and beetles. They get their energy from the sap and their proteins from the arthropods.

They give birth at the beginning of winter (May and June) or late spring (October and November). They have one or two babies, which stay in the pouch for 80 or 90 days. When they come out of the pouch they stay in the nest for another three weeks. Young Leadbeater's possums are often eaten by owls. 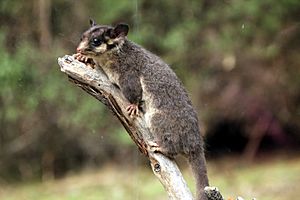 Because of the small area where they live, and the mix of forest trees that they need, the Leadbeater's possums is an endangered species. Logging continues to be a major threat to the possum. In 1993 five hectares of protected habitat east of Powelltown, was logged because of a "mapping error." Author, Peter Preuss, said that the number of possums dropped in 1997 with their current habitat (limited to a 50-square-kilometre area) under threat from logging. He said that there needed to be a new breeding program.

Dr. David Lindenmeyer, (Australian National University), has said that the need to make nest boxes showed that logging was removing too many older trees with hollows needed by species like Leadbeater's possum. Studies have shown that logging in the forest between the Yarra Valley National Park and Mount Bullfight Conservation Reserve in February 2006, led to the deaths of most possums in the area. Adult possums are territorial and do not want to move. Many more were killed early in 2007 when VicForests cleared large firebreaks through possum habitat after the Christmas fires. Firebreaks and cleared land stop the possums from being able to travel and breed with other nearby groups.

With its much of its known habitat destroyed in the bushfires of February 2009 the species status is currently in doubt. The mapped distribution of the Leadbeater's possum exactly matches the area burnt in the fires.

All content from Kiddle encyclopedia articles (including the article images and facts) can be freely used under Attribution-ShareAlike license, unless stated otherwise. Cite this article:
Leadbeater's possum Facts for Kids. Kiddle Encyclopedia.