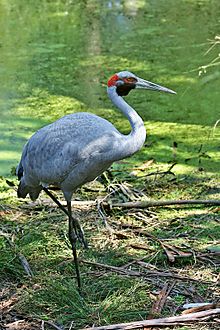 A brolga at Healesville Sanctuary

Healesville Sanctuary, or the Sir Colin MacKenzie Fauna Park, is a zoo at Healesville in Victoria. It only keeps animals that come from Australia. It has a history of breeding Australian animals. In 1943 it became the first zoo to breed a platypus. The only other zoo to have bred a platypus is Sydney's Taronga Zoo. It also helps by breeding the endangered Helmeted honeyeater. It is one of three zoos in Victoria run by Zoos Victoria; the others are the Melbourne Zoo and the Werribee Open Range Zoo.

The zoo is in a natural bush setting. Paths wind through different habitat areas with wallabies, wombats, dingoes, kangaroos, and over 200 Australian birds. There are tours, bird shows and information areas for visitors.

Dr Colin MacKenzie (knighted in 1929) set up the Institute of Anatomical Research in 1921. It was on 73 acres (30 ha) of land which had been part of the Coranderrk Aboriginal Reserve. The Reserve was given to the Healesville Council in 1927. It became the Sir Colin MacKenzie Sanctuary in 1934. By 1947 the sanctuary had grown into a major tourist attraction and the management was taken over by the Victorian government. Since then the zoo has grown with new special features and facilites including the $6 million Australian Wildlife Health Centre in 2005.

The Healesville Sanctuary is currently working on breeding programs for endangered species including the:

All content from Kiddle encyclopedia articles (including the article images and facts) can be freely used under Attribution-ShareAlike license, unless stated otherwise. Cite this article:
Healesville Sanctuary Facts for Kids. Kiddle Encyclopedia.