The Tasmanian pademelon (Thylogale billardierii), also known as the rufous-bellied pademelon or red-bellied pademelon, is the sole species of pademelon found in Tasmania, and was formerly found throughout southeastern Australia. This pademelon has developed heavier and bushier fur than its northern relatives, who inhabit northern Australia and Papua New Guinea. 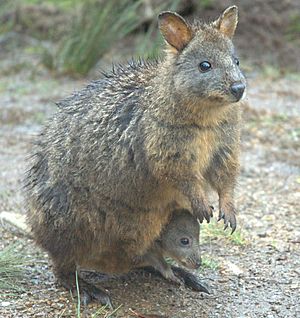 Female and her joey. 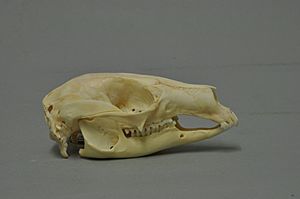 Skull of a Tasmanian pademelon

Pademelons are solitary and nocturnal, spending the daylight hours in thick vegetation. Rainforest, sclerophyll forest, and scrubland are preferred, although wet gullies in dry open eucalyptus forest are also used. Such places, next to open areas where feeding can occur, are especially favoured. After dusk, the animals move onto open areas to feed, but rarely stray more than 100 metres from the forest edge.

The species is abundant and widespread throughout Tasmania.

The Tasmanian pademelon is a nocturnal herbivore feeding on a wide variety of plants, from herbs, green shoots and grass, to some nectar-bearing flowers.

There is no specific breeding season, though 70% of pademelon births seem to occur around the beginning of winter. Gestation for the female is 30 days. The young are in the pouch for about 6 months thereafter, and are weaned at around 8 months. Joeys are sexually mature at 14–15 months. Pademelons live between 5 and 6 years in the wild.

All content from Kiddle encyclopedia articles (including the article images and facts) can be freely used under Attribution-ShareAlike license, unless stated otherwise. Cite this article:
Tasmanian pademelon Facts for Kids. Kiddle Encyclopedia.