The Pacific emerald dove or brown-capped emerald dove (Chalcophaps longirostris) is a pigeon which is a widespread resident breeding bird in the tropical and sub-tropical parts of Indonesia to northern and eastern Australia. It was formerly conspecific with the common emerald dove.

This is a common species in rainforest and similar dense wet woodlands, farms, gardens, mangroves and coastal heaths. It builds a scant stick nest in a tree up to five metres and lays two cream-coloured eggs. Breeding tends to occur in Australia spring or early summer in southeastern Australia and late in the dry season in northern Australia.

Its flight is fast and direct, with the regular beats and an occasional sharp flick of the wings which are characteristic of pigeons in general. It often flies low between the patches of dense forest it prefers, but when disturbed will frequently walk away rather than fly. They are particularly good weavers when flying through forests. When flying they expose a buff underwing and a chestnut colour of their flight feathers.

The Pacific emerald dove is a stocky, medium-sized pigeon, typically 23 to 28 centimetres (9.1 to 11.0 inches) in length. The back and wings are bright emerald green. The flight feathers and tail are blackish, and broad black and white bars show on the lower back in flight. The head and underparts are dark vinous pink fading to greyish on the lower belly. The eyes are dark brown, the bill bright red and legs and feet rufous. 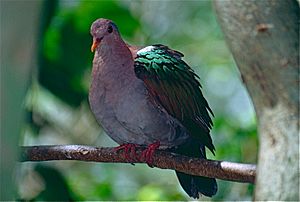 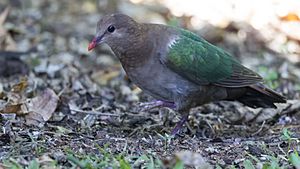 The male has a white patch on the edge of the shoulders and a grey crown, which the female lacks. Females will tend to have a browner complexion with a grey mark on the shoulder. Immature birds resemble females but have brown scallops on their body and wing plumage.

Pacific emerald doves usually occur singly, pairs or in small groups. They are quite terrestrial, often searching for fallen fruit on the ground and spending little time in trees except when roosting. They eat seeds and fruits of a wide variety of plants and are generally tame and approachable.

The call is a low soft moaning cooing consisting of about six to seven coos starting quietly and rising. They also call a nasal "hoo-hoo-hoon". Males perform a bobbing dance during courtship.

A former subspecies, C. l. chrysochlora, has been discontinued and forms re-allocated to C. l. rogersi and C. l. timorensis.

All content from Kiddle encyclopedia articles (including the article images and facts) can be freely used under Attribution-ShareAlike license, unless stated otherwise. Cite this article:
Pacific emerald dove Facts for Kids. Kiddle Encyclopedia.