The coastal taipan (Oxyuranus scutellatus), or common taipan, is a species of large, extremely venomous snake in the family Elapidae. The species is native to the coastal regions of northern and eastern Australia and the island of New Guinea. According to most toxicological studies, this species is the third-most venomous land snake in the world after the inland taipan and eastern brown snake based on its murine LD50.

Two subspecies are recognized as being valid, including the nominotypical subspecies.

The coastal taipan is the longest venomous snake in Australia. Adult specimens of this species typically attain sexual maturity around 1.2 m (3.9 ft) in total length (including tail). More mature specimens can grow to between 1.5 and 2.0 m (4.9 and 6.6 ft). Other taipans, including the inland taipan, attain broadly similar sizes although they tend to be slightly smaller in average size. A specimen of an average 2 m (6.6 ft) total length weighs around 3 kg (6.6 lb). According to the Queensland Museum, the longest recorded total length for the coastal taipan was a specimen that was 2.9 m (9.5 ft) and weighed 6.5 kg (14 lb). However, though exceptionally rare, much larger specimens are widely believed to exist, including specimens of as much as 3.3 m (11 ft). The taipan is exceeded in length among venomous snakes only by the Asiatic king cobra, African black mamba, and genus Lachesis (bushmasters) of the American neotropics.

The head of the coastal taipan is long and narrow like that of the African black mamba (Dendroaspis polylepis), but without the "coffin" shape. The two species are strongly convergent in several aspects of morphology, ecology and behaviour. O. scutellatus has an angular brow and is lighter-coloured on the face. The body is slender and colouration can vary. It is often uniformly light olive or reddish-brown in colour, but some specimens may be dark gray to black. The colouration is lighter on the sides of the body, and the ventral side (the belly) is usually a creamy-white to a pale light yellow in colour, and is often marked with orange or pink flecks. Individuals undergo a seasonal change in colour, becoming darker in winter and fading in summer. The eyes are large, round, and are light brown or even hazel in colour with large pupils.

Found in northern and eastern Australia, the coastal taipan, despite its name, can live in habitats hundreds of kilometres away from the nearest beach. Its geographical range extends from north-western Western Australia, the Northern Territory, across Cape York Peninsula and down eastern Queensland into northern New South Wales (as far south as Grafton). However, the coastal taipan is not found in regions where the maximum winter temperature is below 20 °C (68 °F). The second subspecies (Oxyuranus scutellatus canni ) is found throughout the island of New Guinea, with higher concentrations of the snake being found in the nation of Papua New Guinea.

The coastal taipan can be found in a variety of different habitats. It can be found in warm, wetter temperate to tropical coastal regions, in monsoon forests, wet and dry sclerophyll forests and woodlands, and in natural and artificial grassy areas, including grazing paddocks and disused rubbish tips. In Queensland, it has adapted well to sugarcane fields, where it thrives on the rodent population in the fields. In Far North Queensland in the Cape York Peninsula, it is usually found in open woodland areas. Thickets of introduced Lantana are also favoured habitat. The coastal taipan shelters in abandoned animal burrows, hollow logs, and in piles of vegetation and litter.

The coastal taipan is primarily diurnal, being mostly active in the early to mid-morning period, although it may become nocturnal in hot weather conditions. When hunting, it appears to actively scan for prey using its well-developed eyesight, and is often seen traveling with its head raised slightly above ground level. Once prey is detected, the snake "freezes" before hurling itself forward and issuing several quick bites. The prey is released and allowed to stagger away. This strategy minimizes the snake's chance of being harmed in retaliation, particularly by rats, which can inflict lethal damage with their long incisors and claws. It is not a confrontational snake and will seek to escape any threat. When cornered, though, it can become very aggressive and may strike repeatedly. 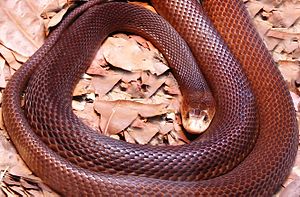 Oxyuranus scutellatus is the world's third-most venomous terrestrial snake. The SC LD50 value of this species is 0.106 mg/kg, according to Australian Venom and Toxin database, and 0.12 mg/kg, according to Engelmann and Obst (1981). The average venom yield per bite is 120 mg, with a maximum record of 400 mg. The venom contains Taipoxin, which has an LD50 of 2μg/kg, meaning 124μg can kill a healthy 62kg adult. Taipoxin is the most potent toxin from snake venom, which makes the Coastal Taipan, in terms of pure toxins, the most venomous animal in the world. Taipoxin is the most powerful animal toxin.

Its venom contains primarily taicatoxin, a highly potent neurotoxin affecting the nervous system and the blood's ability to clot. Bite victims may experience headache, nausea/vomiting, collapse, convulsions, paralysis, internal bleeding, myolysis (destruction of muscle tissue), and kidney damage. In cases of severe envenomation, death can occur as early as 30 minutes after being bitten, but the average is around 2.5 hours. The time between a bite and death depends on various factors such as the nature of the bite and the constitution of the victim. Untreated bites have a mortality rate of 100% as the coastal taipan always delivers a fatal dose of venom (an average bite delivers 10–⁠12× the lethal dose of venom for a human adult male), and medical professionals recommend that victims seek immediate medical attention even for apparently minor bites. Before the introduction of specific antivenom by the Commonwealth Serum Laboratories in 1956, nearly all bites were fatal.

In his book Venom, which explores the development of a taipan antivenom in Australia in the 1940s and 1950s, author Brendan James Murray argues that only one person is known to have survived an Oxyuranus bite without antivenom: George Rosendale, a Guugu Yimithirr man bitten at Hope Vale in 1949. Murray writes that Rosendale's condition was so severe that nurses later showed him extracted samples of his own blood that were completely black in colour.

All content from Kiddle encyclopedia articles (including the article images and facts) can be freely used under Attribution-ShareAlike license, unless stated otherwise. Cite this article:
Coastal taipan Facts for Kids. Kiddle Encyclopedia.