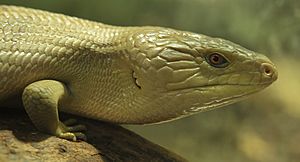 The eastern blue-tongued lizard (Tiliqua scincoides scincoides) is a subspecies of large skink which is common throughout eastern Australia, often found in bushland and suburban areas where conditions are suitable. The lizard is known as blue-tongue because its tongue can range from bright to dark blue, and it has a habit of displaying it prominently and hissing loudly when disturbed.

The eastern blue-tongued skink is a stout and slow lizard with brown to grey scales and a barred pattern across the body and tail. The underside is usually pale. Blue-tongued lizards are popular as pets and can live up to 30 years in captivity. They give birth to live young, between six and a record 20 per litter. The young consume the egg sac immediately after birth. They resemble the adult form closely. Several other types of blue-tongued lizard are in the genus Tiliqua, such as the northern blue-tongued skink and the shingleback or stump-tailed skink.

This subspecies was first described as Lacerta scincoides, by the Irish surgeon and botanist John White.

All content from Kiddle encyclopedia articles (including the article images and facts) can be freely used under Attribution-ShareAlike license, unless stated otherwise. Cite this article:
Eastern blue-tongued lizard Facts for Kids. Kiddle Encyclopedia.