The spiny-tailed monitor, a medium-sized monitor lizard, can attain a total length of up to 70 cm (27 in), although there are unconfirmed reports of wild individuals growing up to 34 inches. The tail is about 1.3-2.3 times as long as the head and body combined. The upper side is a rich, dark brown and painted with bright-yellowish to cream spots, which often enclose a few dark scales. Its tail is round in section and features very spinose scales. There are 70-115 scales around the middle of the body. The spiny-tailed monitor is distinguished from the similar-looking species V. baritji and V. primordius by the presence of pale longitudinal stripes on the neck.

The spiny-tailed monitor is part of an Indonesian and Australian radiation of small monitor lizards, the subgenus Odatria.

Varanus primordius was at one point considered a subspecies (V. a. primordius), but has since been elevated to full species status.

In the pet trade, two "variants" of spiny-tailed monitors are commonly available. The "red ackie" monitor is likely the subspecies V. a. acanthurus, while the "yellow ackie" is likely V. a. brachyurus.

However, the taxonomic status of the three subspecies is uncertain. In 2006, the results of a study on the mtDNA of Australian monitors were published, according to which the two continental subspecies do not form natural (monophyletic), taxonomic entities. V. a. insulanicus was proven to be monophyletic, but it is more closely related to V. baritji than to other V. acanthurus. Therefore, V. a. insulanicus might represent a distinct species. Wilson and Swan (2010) still accept V. a. insulanicus as a valid subspecies of V. acanthurus, which is easily distinguished from other spiny-tailed monitors by its dark colouration and more banded pattern. 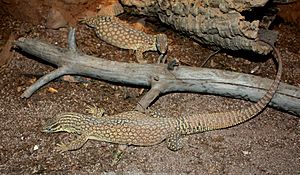 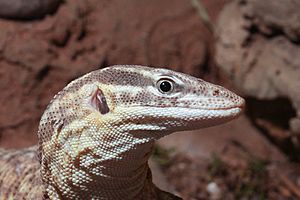 Spiny-tailed monitors are diurnal, solitary ground-dwellers. This species is most often found in its shelter, mainly under rock slabs, boulders or in rock crevices. Only rarely do they hide in spinifex. As the spiny-tailed monitor has a lower level of activity compared to other monitor lizards, as well as a lower metabolic rate, it is often found in its hideout at day, and most likely it is a sit-and-wait-predator.

They prey mainly on insects, most commonly orthopterans such as grasshoppers, followed by beetles and cockroaches. Small lizards such as skinks, geckos, or dragon lizards are also eaten, making up about a third of its diet. Less often, this species feeds on other insects, spiders, snails or young marsupials. Approximately 70% of its water requirement comes from food.

In captivity, a clutch consists of up to 18 eggs. The young hatch after three to five months of incubation, and measure 15 cm (6 in). The knowledge on reproduction in the wild is sparse. Males most likely mature at 30 cm (12 in) snout-vent length, females mature at 25–36 cm (10–14 in) snout-vent length. Ovulation occurs in August and November. The eggs are deposited in self-dug tunnels.

All content from Kiddle encyclopedia articles (including the article images and facts) can be freely used under Attribution-ShareAlike license, unless stated otherwise. Cite this article:
Spiny-tailed monitor Facts for Kids. Kiddle Encyclopedia.