The plumed whistling duck (Dendrocygna eytoni), also called the grass whistling duck, is a whistling duck that breeds in Australia. It is a predominantly brown-coloured duck with a long neck and characteristic plumes arising from its flanks. The sexes are similar in appearance.

Measuring 42–60 cm (16.5–23.5 in) and weighing around one kilogram (2.2 lb), it is a long-necked duck with brown upperparts, paler underparts and a white rump. The chest is chestnut with thin black bars, while long black-margined plumes arise from its flanks. Its bill and legs are pink, and its iris is yellow. The male and female are similar in appearance. The species has a characteristic lowered neck and short, dark, rounded wings while flying.

The call is a characteristic whistle which gives the bird its common name. 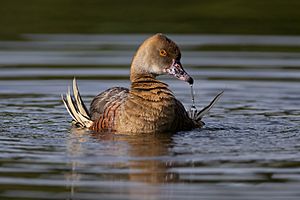 The range is eastern, northern and central Australia from the Kimberley across the Top End and Cape York, down to southern Queensland and northern New South Wales on the east coast, although may reach northwestern Victoria inland, in the vicinity of the Murray River. It is also found in New Guinea. The preferred habitat is tall grassland and savanna, often near bodies of water.

Rather than diving for food in bodies of water like other ducks, the plumed whistling duck feeds by cropping grass on land.

The plumed whistling duck breeds during the wet season, generally in January to March, although it can be later in April or, in a few cases, May. One brood is raised per season. The nest is a mattress of grasses or similar material in tall grass, or in or near vegetation as cover. 10 to 12 oval eggs are laid, measuring 48 x 36 mm; 14 or more have been recorded on occasion. Initially shiny and creamy-coloured, they may become stained. The incubation period is around 30 days.

All content from Kiddle encyclopedia articles (including the article images and facts) can be freely used under Attribution-ShareAlike license, unless stated otherwise. Cite this article:
Plumed whistling duck Facts for Kids. Kiddle Encyclopedia.