The glossy ibis (Plegadis falcinellus) is a wading bird in the ibis family Threskiornithidae. The scientific name derives from Ancient Greek plegados and Latin, falcis, both meaning "sickle" and referring to the distinctive shape of the bill. 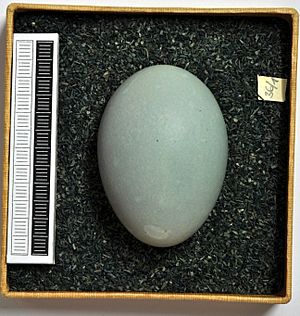 This is the most widespread ibis species, breeding in scattered sites in warm regions of Europe, Asia, Africa, Australia, and the Atlantic and Caribbean regions of the Americas. It is thought to have originated in the Old World and spread naturally from Africa to northern South America in the 19th century, from where it spread to North America. The glossy ibis was first found in the New World in 1817 (New Jersey). Audubon saw the species just once in Florida in 1832. It expanded its range substantially northwards in the 1940s and to the west in the 1980s. This species is migratory; most European birds winter in Africa, and in North America birds from north of the Carolinas winter farther south. Though generally suspected to be a migratory species in India, the glossy ibis is resident in western India. Birds from other populations may disperse widely outside the breeding season. While generally declining in Europe, it has recently established a breeding colony in southern Spain, and there appears to be a growing trend for the Spanish birds to winter in Britain and Ireland, with at least 22 sightings in 2010. In 2014, a pair attempted to breed in Lincolnshire, the first such attempt in Britain A few birds now spend most summers in Ireland, but as yet there is no evidence of breeding there. In New Zealand, a few birds arrive there annually, mostly in the month of July; recently a pair bred amongst a colony of Royal Spoonbill.

Glossy ibises undertake dispersal movements after breeding and are highly nomadic. The more northerly populations are fully migratory and travel on a broad front, for example across the Sahara Desert. Glossy ibis ringed in the Black Sea seem to prefer the Sahel and West Africa to winter, those ringed in the Caspian Sea have been found to move to East Africa, the Arabic peninsula and as far east as Pakistan and India. Numbers of glossy ibis in western India varied dramatically seasonally with the highest numbers being seen in the winter and summers, and drastically declining in the monsoon likely indicating local movements to a suitable area to breed. Populations in temperate regions breed during the local spring, while tropical populations nest to coincide with the rainy season. Nesting is often in mixed-species colonies. When not nesting, flocks of over 100 individuals may occur on migration, and during the winter or dry seasons the species is usually found foraging in small flocks. Glossy ibises often roost communally at night in large flocks, with other species, occasionally in trees which can be some distance from wetland feeding areas.

Glossy ibises feed in very shallow water and nest in freshwater or brackish wetlands with tall dense stands of emergent vegetation such as reeds, papyrus or rushes) and low trees or bushes. They show a preference for marshes at the margins of lakes and rivers but can also be found at lagoons, flood-plains, wet meadows, swamps, reservoirs, sewage ponds, paddies and irrigated farmland. When using farmlands in western India, glossy ibis exhibited strong scale-dependent use of the landscape seasonally preferring using areas with >200 ha of wetlands during the summer, and using areas that had intermediate amounts of wetlands (50-100 ha) in the other seasons. It is less commonly found in coastal locations such as estuaries, deltas, salt marshes and coastal lagoons. Preferred roosting sites are normally in large trees which may be distant from the feeding areas.

The nest is usually a platform of twigs and vegetation positioned at least 1 m (3.3 ft) above water, sometimes up to 7 m (23 ft) in tall, dense stands of emergent vegetation, low trees or bushes. 3 to 4 eggs (occasionally 5) are laid, and are incubated by both male and female birds for between 20 and 23 days. The young can leave the nest after about 7 days, but the parents continue to feed them for another 6 or 7 weeks. The young fledge in about 28 days. 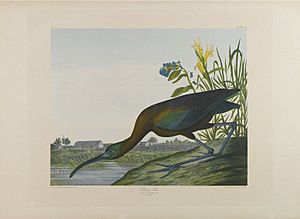 The diet of the glossy ibis is variable according to the season and is very dependent on what is available. Prey includes adult and larval insects such as aquatic beetles, dragonflies, damselflies, grasshoppers, crickets, flies and caddisflies, Annelida including leeches, molluscs (e.g. snails and mussels), crustaceans (e.g. crabs and crayfish) and occasionally fish, amphibians, lizards, small snakes and nestling birds.

Sounds made by this rather quiet ibis include a variety of croaks and grunts, including a hoarse grrrr made when breeding.

The glossy ibis is one of the species to which the Agreement on the Conservation of African-Eurasian Migratory Waterbirds (AEWA) applies. Glossy ibises can be threatened by wetland habitat degradation and loss through drainage, increased salinity, groundwater extraction and invasion by exotic plants.

The common name black curlew may be a reference to the glossy ibis and this name appears in Anglo-Saxon literature. Yalden and Albarella do not mention this species as occurring in medieval England.

All content from Kiddle encyclopedia articles (including the article images and facts) can be freely used under Attribution-ShareAlike license, unless stated otherwise. Cite this article:
Glossy ibis Facts for Kids. Kiddle Encyclopedia.