The Macquarie perch (Macquaria australasica) is an Australian native freshwater fish of the Murray-Darling river system. It is a member of the family Percichthyidae and is closely related to the golden perch (Macquaria ambigua).

The Macquarie perch derives its scientific name from the Macquarie River where the first scientifically described specimen was collected (Macquaria) and a derivation of the Latin word for "southern" (australasica). 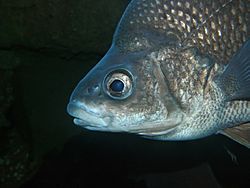 Macquarie perch are a relatively placid native fish species with the bulk of their diet consisting of aquatic invertebrates such as caddisfly, stonefly and mayfly species, with a small quantity of terrestrial insects taken as well.

The Macquarie perch is primarily an upland native fish and has a breeding biology clearly adapted to flowing upland rivers and streams. (For this reason, the species has proven difficult to breed artificially, as captive females do not produce ripe eggs when kept in still broodponds or tanks). Macquarie perch breed in late spring at temperatures of 15 to 16 °C, in flowing water over unsilted cobble and gravel substrate. The demersal (sinking) eggs fall into the interstices (spaces) between the gravel and cobble, where they lodge and are then protected and incubated until hatching. This is a breeding strategy similar to that used by introduced species of trout.

Macquarie perch appear to have inherited the sexual dimorphism of other Macquaria species where females reach a larger maximum size than males. Females also reach sexual maturity at older, larger sizes than males.

Macquarie perch were originally found in the larger upland rivers and streams in the south-eastern corner of the Murray-Darling system, which they usually co-inhabited with trout cod and one or both of the blackfish species.

Macquarie perch continue a pattern found in native freshwater fish of the Murray-Darling system of specialisation into lowland and upland stream inhabitants. Macquarie perch are a speciated, more specialised upland version of the golden perch, which is primarily a lowland fish. (Having said this, the primarily lowland golden perch, being highly adaptable species, did extend into upland habitats) in some situations.

There is also a translocated self-sustaining breeding population of Macquarie Perch located in the middle and upper reaches of the Yarra River on the outskirts of Melbourne. They highest numbers are found lowest reaches, which also support a mix of translocated native and introduced fish including trout. In this stretch however no fish species is particularly dominant, and introduced trout are not numerous.

Over the last 20 or 30 years, the last few remaining Macquarie perch populations in upland habitats have faltered. All of these populations appear to be in extinction vortices and may disappear completely over the next several decades.

All content from Kiddle encyclopedia articles (including the article images and facts) can be freely used under Attribution-ShareAlike license, unless stated otherwise. Cite this article:
Macquarie perch Facts for Kids. Kiddle Encyclopedia.