It is an Australian endemic species, about 100cm long. It has brown upper body plumage, grayish-brown below, rounded wings and strong legs. It is the longest and third heaviest of all songbirds.

They are capable of mimicking a wide variety of sounds, including other bird's songs and man-made sounds like car alarms and chainsaws. 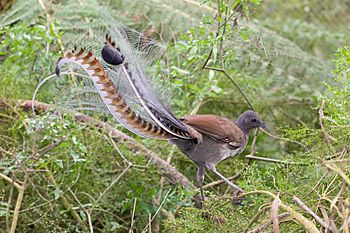 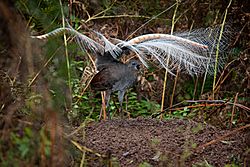 The superb lyrebird is endemic to Australia and can be found in the forests of south-eastern Australia, ranging from southern Victoria to south-eastern Queensland.

The bird was introduced to southern Tasmania in 1934–54, amid ill-founded fears the species was becoming threatened with extinction in its mainland populations. The Tasmania population is thriving and even growing. Across the rest of its large range, the lyrebird is common, and is evaluated as being of least concern on the IUCN Red List of Threatened Species.

This range of the superb lyrebird includes a variety of biomes, including sub-tropical and temperate rainforests, and wet and dry sclerophyll forests. The preferred habitat of the bird is in wet forests and rainforests, where there is an open ground layer of moist leaf litter shaded by vegetation. In favourable seasons, the lyrebird range is often extended into drier areas further from water sources.

The superb lyrebird is a large, pheasant-sized terrestrial passerine, ranging in length from 860mm (female) to 1m (male). Females weigh around 0.9 kg, and males weigh around 1.1 kg. The plumage colour is mainly dark brown on the upper body, with greyish-brown underparts and red-tinged flight feathers. The wings are short and round, and are only capable of weak flight, being mainly used for balance or for gliding from trees to the ground. The legs are powerful, capable of running quickly, and the feet are strong enough to move branches of up to 10 cm in diameter.

Lyrebirds are renowned for their ornate tails. Adult males have tails up to 700mm long, consisting of sixteen feathers. The outer two feathers, the lyrates, are broad S-shaped feathers, originally named for their resemblance to the shape of a lyre, and have brown and buff coloured patterning. Between the lyrates are twelve filamentaries, feathers of flexible silvery barbs. In the centre of the tail are two silvery median feathers. The tail of the female is less ornate, with shorter lyrates and plain, broad feathers in place of the filamentaries. In both sexes, juveniles have no ornamental tail feathers. The tail plumage develops into that of the mature bird through a series of annual moults, with feathers undergoing change in structure and patterning. The male superb lyrebird reaches maturity in 7–9 years, and the female in 6–7 years.

Superb lyrebirds are ground-dwelling birds that typically live solitary lives. Adults usually live singly in territories, but young birds without territories may associate in small groups which can be single or mixed-sex. Lyrebirds are not strong fliers and are not highly mobile, often remaining within the same area for their entire lifespans. Superb lyrebird territories are generally small, and there are known behavioural differences between different populations.

The diet of the superb lyrebird consists primarily of invertebrates such as earthworms and insects found on the forest floor. There is also evidence that the birds are mycophagists, meaning they eat fungi.

Superb lyrebirds forage by scratching vigorously in the upper soil layers, disturbing the topsoil and leaf litter. The birds are most likely to forage in damp rainforest vegetation relative to drier areas, and in areas where the bottom vegetation strata is open and low in complexity, allowing good access to food sources in the leaf litter.

Superb lyrebirds exhibit polygyny, with a single male and several females. A male's territory can overlap with up to six female territories. Within his territory, the male will construct several circular mounds of bare dirt on the forest floor, for the purpose of conducting courtship displays. These mounds are defended vigorously from other males. 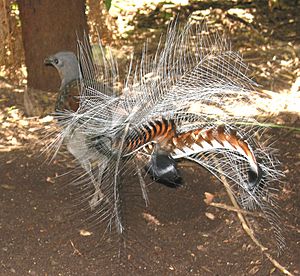 Superb lyrebird in courtship display — as seen from the back

When a male encounters a female lyrebird, he performs an elaborate courtship display on the nearest mound. This display incorporates both song and dance elements. The male fans out his tail horizontally to cover his entire body and head. The tail feathers are vibrated, and the lyrebird beats his wings against his body and struts around the mound. He also sings loudly, incorporating his own vocalisations with mimicry of other bird calls. A study has found evidence that the lyrebirds’ ‘dance choreography’ is highly coordinated to different types of song repertoire. Coordination of movement with acoustic signals is a trait previously thought to be unique to humans, and indicates high cognitive ability.

Females are the sole providers of parental care. They build large domed nests out of sticks on raised earth platforms. Nests are most likely to be located in wetter areas with deep leaf litter and high understory vegetation complexity, reflecting the requirements of food availability and protection from predators.

The female breeds once per year in winter, usually laying a single egg. Eggs are laid in a deep bed of lyrebird feathers within the nest, and are then incubated by the female for up to 7 weeks. Post-fledging parental care lasts several months, with the female exerting significant energy in feeding and brooding the nestling.

The superb lyrebird is renowned for its mimicry, with an estimated 70-80% of the male's vocalisations consisting of imitations of other model bird species. Females also sing and are capable of mimicry, however, although not to the extent of the males. Mimetic items can be interspersed with lyrebird-specific songs, territorial calls, and alarm calls. The songs adhere to recognisable structures, with different elements repeated in certain patterns.

The mimicry of the superb lyrebird is highly accurate, with even the model animal at times unable to distinguish between model song and mimicked song. For example, one study found that strike-thrushes did not respond any differently to hearing their own songs than to hearing imitations by lyrebirds.

Generally, juveniles initially learn mimetic items through transmission by older lyrebirds, rather than from the model species themselves. This is reflected in the vocalisations of lyrebirds in the Sherbrooke Forest in Victoria, which were observed to frequently mimic the song of pilotbirds, a species that had not been recorded in the area for over 10 years. During the winter when the nestlings hatch, adults more frequently mimic model species that are less active during this time, again suggesting that mimetic items are initially learnt from other lyrebirds.

The quality of mimetic song increases with age, with adult superb lyrebirds having both greater accuracy and a more diverse repertoire of mimetic songs when compared to subadult birds. Subadult lyrebirds produce recognisable imitations, however fall short of adult versions in terms of frequency range, consistency and acoustic purity, for example in imitations of the complex whipbird call.

All content from Kiddle encyclopedia articles (including the article images and facts) can be freely used under Attribution-ShareAlike license, unless stated otherwise. Cite this article:
Superb lyrebird Facts for Kids. Kiddle Encyclopedia.