The Wimmera River, an inland intermittent river of the Wimmera catchment, is located in the Grampians and Wimmera regions of the Australian state of Victoria. Rising in the Pyrenees, on the northern slopes of the Great Dividing Range, the Wimmera River flows generally north by west and drains in Lake Hindmarsh and Lake Albacutya, a series of ephemeral lakes that, whilst they do not directly empty into a defined watercourse, they form part of the Murray River catchment of the Murray-Darling basin.

The Wimmera River rises in the Great Dividing Range below Elmhurst, between Ararat and Avoca, and flows generally north and west, through Glenorchy, Horsham, Dimboola and Jeparit, also forming the eastern boundary of the Little Desert National Park. It is joined by fourteen minor tributaries, including the Mackenzie River, before reaching its mouth at Lake Hindmarsh, near Jeparit. The river descends 220 metres (720 ft) over its 278-kilometre (173 mi) course.

On the rare occasions that Lake Hindmarsh overflows, water flows via Outlet Creek to Lake Albacutya. In most years the Wimmera River's flow does not reach these terminal lakes, and the watercourse itself contracts into a series of pools. On average, the lake fills once in twenty years. The inflow of saline groundwater into the lower reaches of the river in recent years has severely affected its water quality, making the water more salty than sea water in several locations.

The river is crossed by the Pyrenees Highway near its source, the Henty Highway south of Horsham, and the Western Highway west of Horsham and again west of Dimboola.

The Wimmera has a feature typical of desert drainage patterns in that it has distributaries, the Dunmunkle Creek and the Yarriambiack Creek which divert water away from the Wimmera at times of high flow or flood.

The health of the Wimmera River was expected to improve following the Wimmera-Mallee pipeline project that was completed in 2008. The project involved replacing old, inefficient stock-water supply and irrigation infrastructure, with a pipeline system. Prior to the project's completion, up to 90 percent of water extracted from the Wimmera River was lost through evaporation and seepage. The Wimmera-Mallee Pipeline system was expected to be many times more efficient and meant that there would be much less water extracted from the Wimmera River. This was anticipated to reduce the quantities of water taken from the river and cause an increase in environmental flows in the river system (see discussion). 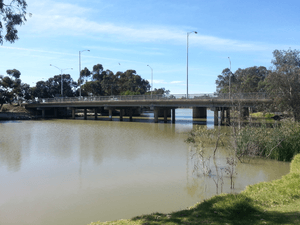 The Wimmera River at Horsham has been subject to periodic flooding, with peaks recorded as follows:

All content from Kiddle encyclopedia articles (including the article images and facts) can be freely used under Attribution-ShareAlike license, unless stated otherwise. Cite this article:
Wimmera River Facts for Kids. Kiddle Encyclopedia.