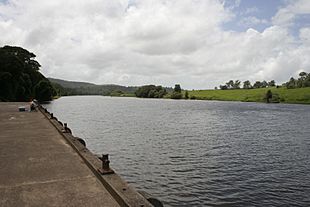 Manning River rises below Mount Barrington, on the northeastern slopes of the Great Dividing Range within Barrington Tops National Park, east southeast of Ellerston, and flows generally southeast, joined by eleven tributaries including the Pigna Barney, Barnard, Nowendoc, Gloucester, Dawson, and Lansdowne rivers, descending 1,500 metres (4,900 ft) over its 261-kilometre (162 mi) course from the high upper reaches, through the Manning Valley, and out to sea.

The river flows past the towns of Wingham and Taree. At Taree, the river splits and becomes a double delta. The southern arm reaches its mouth at the Tasman Sea of the South Pacific Ocean, near Old Bar. The northern arm is joined by the Dawson River and further downstream the Lansdowne River, reaching its mouth at the Tasman Sea, near Harrington Point; creating two separate entrances to the river: Harrington Inlet (north) and Farquhar Inlet (south). Within the delta there are several channels dividing coastal land into large islands, such as Mitchells and Oxley islands. Between Croki (in the north) and east of Bohnock (in the south), Scotts Creek links both the northern and southern passages of the river.

The Manning River is one of Australia's few large river systems that have not been dammed for water supply purposes anywhere along its catchment. The local water supply is fed by Bootawa Dam, which is an offsite dam, however, water is pumped from the river to the dam whenever river turbidity and flow levels can allow. A small weir is located in the upper reaches of the Barnard River, part of the inter-basin water transfer of the Barnard River Scheme, enabling water to be pumped into the Hunter River to meet the cooling needs of Bayswater and Liddell electric power stations. The scheme is shut down until needed but as of 2006 this scheme was partly decommissioned due to its rare use.

The Manning River is one of only a few Australian mainland rivers to receive annual winter melting snow deposits.

The Manning River is variously traversed by the Pacific Highway between Taree and Coopernook, and the North Coast railway line at Taree.

The traditional custodians of the land surrounding the Manning River and its associated valley are the Australian Aboriginal Biripi people of the Bundjalung nation, who named the river as Boolumbahtee, meaning a place where the brolgas played.

In 1818, John Oxley crossed and named Harrington and Farquhar inlets during a trip from the Hastings River, near Port Macquarie, to Port Stephens. The Manning River itself was first surveyed by Henry Dangar in 1825 and again in 1826 on behalf of the Australian Agricultural Company. Later in 1826, the river was named the Manning River by Robert Dawson for the Deputy Governor of the Australian Agricultural Company, William Manning. In the same year it was declared that the Manning was the northern limit of the Nineteen Counties, defining the areas of New South Wales where settlers were free to occupy.

Until 1913, ships servicing the coast brought goods and supplies up the river. Wingham was established at the furthest point supply boats could reach up the river and became the region’s major port. The old cargo wharf at Wingham Brush has since been refurbished. The town of Tinonee was also settled on the river near Taree.

Whales also frequent the river, mainly at the larger Harrington Inlet, although some do enter the Farquar Inlet and generally do not venture far up river. However, on 16 September 1994 a rare tropical Bryde's whale measuring 9-metre (30 ft) long, nicknamed "Free Willy" by locals, ventured much further up river to Taree. After becoming a tourist attraction, and repeatedly evading attempts by conservationists to free him "Free Willy" was finally rescued by Seaworld Staff in conjunction with NSW National Parks And Wildlife and ORCA (Organisation for the Rescue and Research of Cetaceans in Australia). "Willy" became stranded on a sandbar, and with the assistance of a specially designed inflatable Cetacean Rescue Device, floated and towed back out to sea and was last seen heading for deeper water to the east.

Taree is home to the annual Manning River Summer Festival, which features rowing, and sailing. The Taree Powerboat Club Spectacular is held in the Manning River during the Easter long weekend.

Commercial fishing and oyster farming are both practiced in the Manning. The peak season for oyster production is September to March; and the annual production during 2013 was 146,000 dozen. The link between Taree and the oyster industry is shown by the presence in Taree of the "Big Oyster", a building constructed in the shape of an open oyster shell.

The Manning River area is popular for domestic tourism.

All content from Kiddle encyclopedia articles (including the article images and facts) can be freely used under Attribution-ShareAlike license, unless stated otherwise. Cite this article:
Manning River Facts for Kids. Kiddle Encyclopedia.