Wingham is a town in the Mid North Coast region of New South Wales, Australia in the Mid-Coast Council area 335 kilometres (208 mi) north of Sydney. According to the 2011 census, Wingham had a population of 5,313.

The first land grant in the area was made at The Bight to George Rowley in 1841. Wingham was chosen as a location for a government settlement because supply boats could not proceed any further up the Manning River and was also located on the road from Raymond Terrace to Port Maquarie. Named after Wingham in Kent, England, Wingham was proclaimed a village in 1844 but allotments were not made until 1854, the same year that Henry Flett laid out Taree as a private settlement. In the meantime, Tinonee had also been established as a government settlement and in 1866 had a population of 100, compared to 90 at Wingham and 150 at Taree.

Wingham was proclaimed a municipality in 1889. By 1909, Wingham consisted of 285 houses and had a population of 900, but government services had been transferred to Taree, which had a population of 1300 in 269 houses. The municipalities were merged with each other and the Manning Valley Shire in 1981 to form the City of Greater Taree. 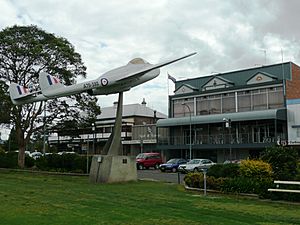 A de Haviland Vampire at Central Park outside the Wingham RSL

Wingham's main street, Isabella Street runs east west and fronts the typically English town square, Central Park. Around the eastern end Central Park are the Wingham Brush Public School, the Victorian style School of Arts, built in 1907 and now a council building with Library at the rear, the state heritage listed Post Office, built in 1884, and a telephone exchange. Along the southern side of the park runs Farquhar Street which has a private residence, the Georgian Revival style Courthouse, built in 1934, the 1909 Federation style police station, Catholic Presbytery, St. Joseph's Catholic School, Our Lady of Perpetual Succour Catholic Church, the Manning Valley Historical Society rooms and Museum and a dental surgery. On the corner of Bent and Farquhar Streets stands the old Gibson and Skinner Butchery, built in 1911. Bent Street runs along the western side of Central Park and is home to the Australian Hotel (the Top Pub to the locals), the Wingham District Memorial Services Club, formerly a Returned Services League Social Club and various shops. Shops also dominate the northern side of the park. The Northeast corner was occupied by the Wingham Hotel or Bottom Pub from 1926 until it burned down on 5 July 2010. 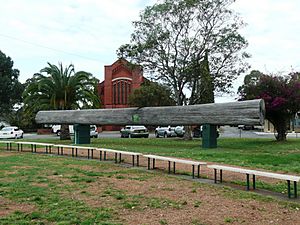 Central Park itself is home to "The Log," a massive log felled in the surrounding countryside which serves to remind the townsfolk of the timber (and dairy) driven history of the area, a de Havilland Vampire fighter plane (opposite the RSL Club), a cricket pitch (Phil Tufnell played an exhibition match in Wingham in which he was bowled for a duck in the first innings, by Glenn Levine, but made a good fist of it in the second), some children’s play equipment, a drinking fountain commemorating the installation of mains water in the town, a small ornamental waterfall (which has been filled in with a garden), and two flag poles at opposite ends of the northern side of the park. 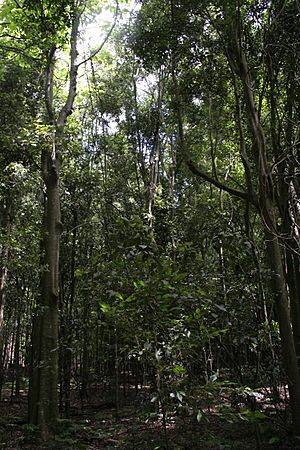 Along the Manning River is Wingham Brush, an area of native bush including spectacular Moreton Bay Fig trees and home to a colony of flying foxes. For many years the flying foxes were considered pests and various initiatives were taken to remove them, including offering free ammunition to those willing to shoot them. These efforts proved ineffective and, in more recent years, moves have been taken to protect the flying foxes, which have become a tourist attraction. Wingham Brush is also home to a large number of Moreton Bay Fig trees.

Wingham is the gateway to the Ellenborough Falls on the Bulga Plateau, the second longest single drop waterfall in the Southern Hemisphere. The Bank Guesthouse, formerly the local branch of the Westpac Bank, featured on the Seven Network's Sydney Weekender with Mike Whitney in 1999. 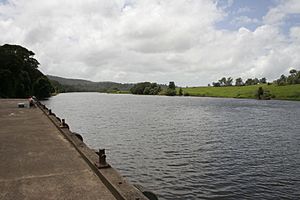 The old cargo wharf on the Manning River

Wingham High School is located three blocks northeast of Central Park, and has an extensive agricultural science department, owning three properties and a feedlot. The WHS Agricultural Show Team breeds their own cattle. They specialise in commercial beef animals, and have won first ribbons for hoof and hook, steer competitions, as well as junior judging and parading, in such shows as the Royal Sydney Show, Royal Brisbane Show and Tamworth Show.

All content from Kiddle encyclopedia articles (including the article images and facts) can be freely used under Attribution-ShareAlike license, unless stated otherwise. Cite this article:
Wingham, New South Wales Facts for Kids. Kiddle Encyclopedia.