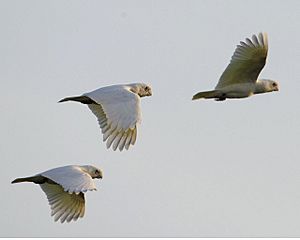 The river is approximately 225 kilometres (140 mi) long and rises about 50 kilometres (31 mi) east of Pine Creek. The catchment area is over 8,000 square kilometres (3,089 sq mi) but is ephemeral and only flows in the wet season, during the dry it is a series of pools and billabongs.

The catchment has several small reserve areas forming the Mary River National Park to help protect it. The Arnhem Highway crosses the river near one of the park areas. It also supports multiple land uses including pastoralism, fishing, mining, defence force, tourism, conservation and horticulture. Pastoralism, particularly cattle grazing is the dominant use taking up 63% of the catchment area.

The river has a total of ten tributaries including the Little Mary River, MacKinlay River, Bowerbird Creek, Mingloo Cree and Douglas Creek. It has a mean annual outflow of 2,400 gigalitres (3.139×109 cu yd),

Its lower reaches form part of the Adelaide and Mary River Floodplains Important Bird Area. The river is noted for its population of saltwater crocodiles, and is breeding area for the Barramundi, the target fish species for recreational anglers in the area. It is one of eight rivers in the Northern Territory with a large floodplain system in their catchment area. The wetlands occupy an area of approximately 1,300 square kilometres (502 sq mi) and are predominantly freshwater, although they suffer from saltwater intrusion. The wetlands provide a mosaic of habitats and are listed in the Directory of Important Wetlands. It is almost unique for an Australian river in that it has had no major tidal estuary as a river outlet for at least the last 2,000 years. 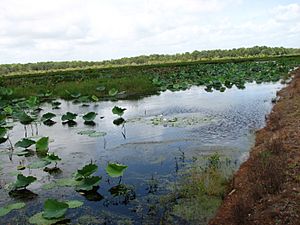 The Fogg Dam Conservation Reserve is another protected area along the river and forms a vital habitat in the dry season for some 250 species of birds including Jabiru, jacana, brolga and pygmy geese.

Two threatened goanna species; Varanus mertensi and Varanus panoptes are found along the river as is the vulnerable yellow-snouted gecko (Lucasium occultum).

The traditional owners of the area are the Wulwulam peoples.

The river was named by John McDouall Stuart in 1862. He wrote in his diary Country burning all round. Lat 13°38'24". This branch I have named the Mary, in honour of Miss Mary Chambers. Stuart always believed that the Mary was a branch of the Adelaide river and always referred to it as The Mary, Adelaide river.

All content from Kiddle encyclopedia articles (including the article images and facts) can be freely used under Attribution-ShareAlike license, unless stated otherwise. Cite this article:
Mary River (Northern Territory) Facts for Kids. Kiddle Encyclopedia.