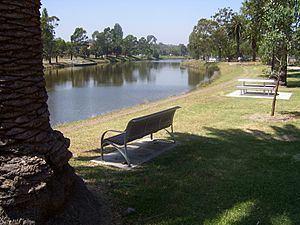 The Maribyrnong River is a perennial river of the Port Phillip catchment, located in the north–western suburbs of Melbourne, in the Australian state of Victoria.

The Maribyrnong River draws its headwaters from near Mount Macedon within the Macedon Ranges, part of the Great Dividing Range. Formed by the confluence of the Jackson Creek and the Deep Creek below Taylors Lakes, the river flows generally southward, joined by two minor tributaries before reaching its confluence with the Yarra River at Yarraville, to eventually empty into Port Phillip. The river descends 42 metres (138 ft) over its 40-kilometre (25 mi) course. 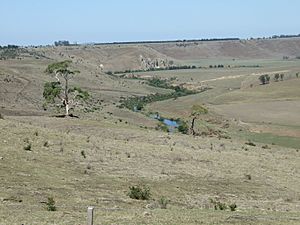 Jackson Creek, a tributary of the Maribyrnong River at Clarkefield.

The head of the Maribyrnong catchment is situated in the Macedon Ranges region of central Victoria around 60 kilometres (37 mi) northwest of Melbourne City Centre. Various creeks beginning in the southern Mount Macedon area flow into Riddells Creek which in turn flows into the Jackson Creek. The Jackson Creek starts its journey northwest of Gisborne, 50 kilometres (31 mi) north of Melbourne CBD. The other major tributary of the Maribyrnong is Deep Creek, which also has its headwaters in the northern and eastern parts of the Macedon Ranges. The creek has cut a deep valley through the surrounding basalt plains in its southward course, in particular as it flows through localities such as Konagaderra and Bulla. To the west of Melbourne Airport the tributaries of the Jackson Creek and the Deep Creek conjoin to form the Maribyrnong River. The Organ Pipes National Park can be found adjacent to the Jackson Creek, near the Calder Freeway, with picnic facilities and a prominent display of basaltic columns a geological formation, so named because they look like organ pipes. 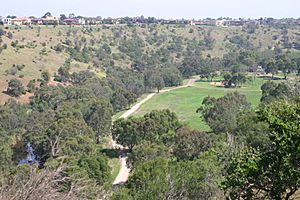 The river flows south and west. At Keilor the river winds back on itself in a giant horseshoe bend, before winding south again at Brimbank Park. Here the river flows 55 metres (180 ft) below the western plains. Brimbank Park forms a huge amphitheatre in the bend in the river with picnic areas, cycle and walking trails, and a café, that is usually busy on weekends and public holidays. The area is rich in birdlife and native fauna. The Maribyrnong River Trail shared path starts at Brimbank Park, following mostly beside the river to near its conjunction with the Yarra River in Footscray. At Avondale Heights and Essendon West residents have views over the river valley to the skyscrapers of the Melbourne CBD.

Aerial panorama of Flemington Racecourse along the Maribyrnong. Taken August 2018.

The river flows past Pipemakers Park at Maribyrnong and Melbourne's Living Museum of the West which presents information on the history of the river and the early industrial history of the site. Dolphins are sometimes sighted in the lower reaches of the river, along with many water birds, especially at Burndap Park. Footscray Park opposite the Flemington Racecourse is only metres down river from Pipemakers Park and Burndap Park, the river then meanders across the floodplain to its juncture with the Yarra River at Yarraville.

The geographic features and tributaries of the river are listed below, tributaries in bold:

The Maribyrnong River is a tributary of the Yarra River

The river was initially named Saltwater River by early settlers, due to the tidal nature of its lower reaches. The name Maribyrnong however, is derived from either mirring-gnay-bir-nong which in Woiwurrung, the language of the local Wurundjeri people, is said to mean "I can hear a ringtail possum" or "saltwater river" (Gunung or Gunnung is Woiwurrung for river, as seen in the names of other watercourses in the area, such as; Koonung Creek and Birrarung).

Marriburnong is an alternate spelling listed on a map dated from 1840.

The inner western and north-western suburbs of Melbourne are located in the vicinity of the Maribyrnong River and the river has given its name to the suburb of Maribyrnong and the local government area, the City of Maribyrnong.

The Maribyrnong River valley has been home for the Wurundjeri people of the Kulin nation for up to 40,000 years. Human remains dated at least 15,000–years–old have been found along the river, with much older signs of human habitation also present.

The first Europeans to explore along the river were the party led by Charles Grimes, Deputy Surveyor-General of New South Wales, in February 1803. John Batman is likely to have explored up the river in early 1835. With the establishment of the colony of Melbourne later that year, sheep runs were soon established by Edmund Davis Fergusson and Michael Solomon in the Avondale and Sunshine areas. On Solomon's sheep station the ford now near the west end of Canning Street in Avondale Heights soon became known as Solomon's Ford. This was the lowest crossing on the Saltwater (Maribyrnong) River, and the furthest inland point of tidal influence. Batman is believed to have crossed the river at this point probably in the well worn steps of Aboriginals. It was for many years the only way from Melbourne to Geelong and land west.

During the second half of the 19th century much of Melbourne's industry was located along the river, and the water became very degraded. With the closure of many industries since the 1960s and 1970s, much river front land has opened up to parkland and highly sought after residential estates.

As the second major river in metropolitan Melbourne, the Maribyrnong plays a very important part in Melbourne's recreation. Boating, cycling along its bike paths such as the Maribyrnong River Trail, fishing, and walking. Light bushwalking can also be done and nature watchers can observe Australian native fauna such as echidna, wallabies as well as the ubiquitous possums and flying foxes.

Road and rail bridges and other crossing points along the Maribyrnong River include: 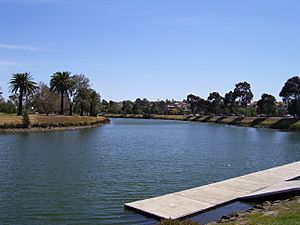 The river as it flows through Aberfeldie. 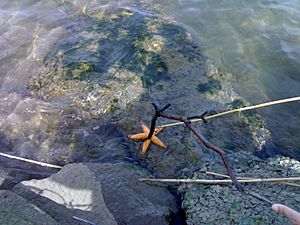 A starfish in the Maribyrnong River near the Flemington Racecourse.

The Maribyrnong River faces various environmental issues, apart from introduced pest species, also pollution and contamination – arsenic and heavy metals from industry and litter including one trap to mitigate litter entering the river from stormwater

All content from Kiddle encyclopedia articles (including the article images and facts) can be freely used under Attribution-ShareAlike license, unless stated otherwise. Cite this article:
Maribyrnong River Facts for Kids. Kiddle Encyclopedia.