The Pioneer River is a river located in North Queensland, Australia. The 120-kilometre (75 mi) long river flows through the city of Mackay.

Captain John Mackay and his party were the first Europeans to discover the river in 1860. Mackay named it Mackay River after his father, George Mackay of Uralla in New South Wales. However, when George Bowen, the Governor of Queensland, visited on the HMS Pioneer in October 1862, the name was changed to Pioneer River.

The river rises in the Pinnacle Ranges below Mount McBryde near Pinevale, 63 kilometres (39 mi) southwest of Mackay. The river flows in a northerly direction into the Pioneer Valley, one of Australia's richest sugar cane areas. At Mirani the river flows to the east before reaching its mouth and emptying into the Coral Sea at Mackay. The river is joined by ten tributaries including Cattle Creek, with the other major tributary being Blacks Creek. The river is too shallow for navigation, drying sandbanks encountered only a few kilometres upstream of the river mouth. During king tides the Pioneer River may experience a tidal range of up to 6.4 metres (21 ft).

The catchment covers an area of 1,550 square kilometres (600 sq mi). Upper parts of the catchment are too steep for agriculture and remain covered by rainforests and open woodlands. In 2002, a Queensland Government report found that the local sugar industry had allowed five pesticides to enter the river, exceeding acceptable standards. 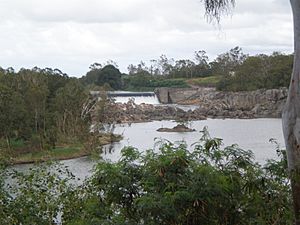 Dumbleton Weir located upstream of Mackay on the Pioneer River

The river has a number of water storage facilities built along its course including Teemburra Dam, Dumbleton Weir, Mirani Weir and Marian Weir. It is crossed by the Bruce Highway and the North Coast railway line in Mackay.

The river is prone to flooding, most recently in February 2008 when a height of just over 7 metres (23 ft) (classed as moderate flooding according to the Bureau of Meteorology) was recorded at a gauge in the centre of Mackay. This height was reached after extremely heavy rain fell over Mackay (600 millimetres (24 in) in 6  hours). After the devastating Mackay cyclone of 21 January 1918, the river was flooded for weeks. The Pioneer has reached major flood levels on twenty occasions since records first began in 1884, with the highest reaching 9.14 metres (30.0 ft) in 1958.

All content from Kiddle encyclopedia articles (including the article images and facts) can be freely used under Attribution-ShareAlike license, unless stated otherwise. Cite this article:
Pioneer River Facts for Kids. Kiddle Encyclopedia.