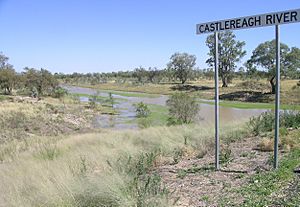 The Castlereagh River is an inland river in New South Wales, Australia. It begins in the Warrumbungles, a mountain range, and flows east towards Coonabarabran. It turns to the south, and then flows north west through Gilgandra and Coonamble, before joining the Macquarie River. The length of the river is about 340 mi (547 km).

The first Europen to see the Castlereagh River was George William Evans in 1818 during John Oxley's expedition. It was later explored by Charles Sturt in 1829. The river is named after Lord Castlereagh, a British politician who was the Secretary of State for the Colonies.

All content from Kiddle encyclopedia articles (including the article images and facts) can be freely used under Attribution-ShareAlike license, unless stated otherwise. Cite this article:
Castlereagh River Facts for Kids. Kiddle Encyclopedia.