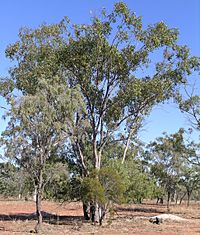 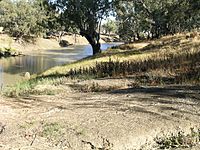 Walgett is a town in northern New South Wales, Australia, and the seat of Walgett Shire. It is near the junctions of the Barwon and Namoi rivers and the Kamilaroi and Castlereagh Highways. In 2011, it had a population of 2,267 including 1,004 Indigenous persons and 1,073 non-Indigenous Australian-born persons. The balance of the population was born overseas.

Walgett takes its name from an Aboriginal word meaning 'the meeting place of two rivers'.

It is a regional hub for wool, wheat and cotton industries. It is the gateway to the New South Wales opal fields at Lightning Ridge to the north and The Grawin to the west. The main crop farmed in the district is wheat; however, the drought has caused an increase in the farming of lucerne and other good hay crops.

A post office was gazetted for "Wallgett on the Barwin River" in 1851 and the town sites were surveyed in 1859. The district would have been occupied prior to this by squatters and their livestock. The town of Walgett was proclaimed on 20 March 1885. The surveyor Arthur Dewhurst mapped the town, naming three streets after British Prime Ministers: Fox (main street—Castlereagh Highway), Pitt and Peel. Arthur Street was named after another surveyor. Walgett Courthouse was built in 1865.

Walgett was a port in the late 19th century for paddle steamers that plied the Murray-Darling river system. The first steamer reached Walgett in 1861 and travelled to the town regularly until c.1870.

Euroka Station, 10 miles (16 km) south of the town on the Castlereagh Highway, was purchased by Fred Wolseley in 1876 and was the site of the invention of the Wolseley Shearing Machine. The machine was tested at Bourke in 1888 on 184,000 sheep and eventually revolutionised the shearing industry.

Walgett's history includes the Freedom Rides in the mid-1960s. After their protests the Freedom Riders left town and headed for Narrabri, when a short distance from town their bus was forced off the road by a car driven by a local farmer. This event led to Walgett, the Freedom Riders and the plight of Indigenous Australians receiving national and international media attention.

Walgett's climate is hot to very hot in summer and mild to cool in winter, with occasional frosts. Summer temperatures frequently rise above 40 °C, and a maximum temperature of 49.2 °C (120.6 °F) was recorded on 3 January 1903, which is one of the hottest temperatures recorded in the state. The annual rainfall is fairly low, at 479.8 mm (18.8 in) which falls fairly evenly throughout the year; however, summer rainfall usually falls as heavy but infrequent downpours associated with thunderstorms; winter rain is usually very light, but can last for days at a time.

All content from Kiddle encyclopedia articles (including the article images and facts) can be freely used under Attribution-ShareAlike license, unless stated otherwise. Cite this article:
Walgett, New South Wales Facts for Kids. Kiddle Encyclopedia.