Dirranbandi is a rural town and locality in the Shire of Balonne, Queensland, Australia. The locality is on the border of Queensland with New South Wales. In the 2016 census, Dirranbandi had a population of 640 people.

Dirranbandi is located on the traditional lands of the Kooma people. However people in Dirranbandi recognise themselves as Kamilaroi.

The town reserve was surveyed in 1885. One hundred housing allotments were first set aside, followed by land for a police station, a state school, and post office.

The railway reached Dirranbandi on 22 May 1913. Dirranbandi had the honour of being the destination for the last mail train to operate in Australia.

The Culgoa Floodplain National Park lies 130 kilometres (81 mi) to the south-west. The town experienced serious flooding in February–March 2010 and January 2011.

Dirranbandi is said by some to be an Aboriginal word meaning "swamp abounding in frogs and waterfowl". Although this is possible, there is no evidence in any of the region's languages to suggest that this is the case. The name may be derived from a Yuwaaliyaay dialect placename, Dhurrunbandaay, relating to dhurrun.gal ("hairy caterpillars") and baanda-y ("move in single file"). There is also a Yuwaalaraay noun, dhirrinbaa, meaning "bad weather camp, on high ground", possibly from dhirrin ("high ground") and -baa ("place of, time of").

Slim Dusty sang about being the Dirranbandi Dandy in the song Cunnamulla Fella, which he co-wrote with Stan Coster.

Actor Ray Meagher grew up near Dirranbandi. He is best known for playing Alf Stewart on soap opera Home and Away, and credits one of his character's catchphrases "Stone the flamin' crows!" to a man who was a stock and station agent in town. 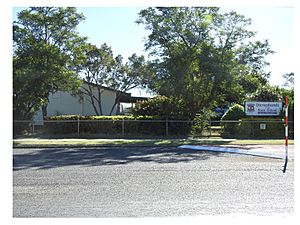 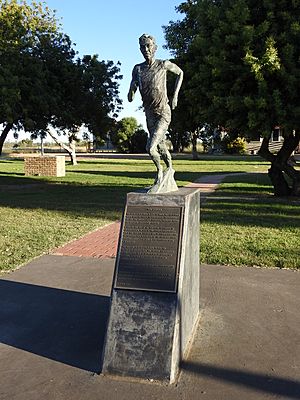 Tom Dancey (1888–1957), a local stockman and Indigenous Australian, won Australia's most famous footrace, the Stawell Gift in 1910. It is indicated the £1000 prize money was kept by his handlers and he only got the trophy. A monument was dedicated to him in April 2011.

Brigadier General William Grant (1870–1939) post-WW1 bought land in the area. He was involved in the Australian Light Horse. Artwork commemorates Dirranbandi's contributions to the Light Horse in terms of men and horses.

Actor Ray Meagher grew up near Dirranbandi. He is best known for playing Alf Stewart on soap opera Home and Away, and credits one of his character's catchphrases "Stone the flamin' crows!" to Dick Backhouse who was a stock and station agent in town.

All content from Kiddle encyclopedia articles (including the article images and facts) can be freely used under Attribution-ShareAlike license, unless stated otherwise. Cite this article:
Dirranbandi, Queensland Facts for Kids. Kiddle Encyclopedia.