The town is 513 kilometres (319 mi) due west of Brisbane and the Gold Coast and sits just inside the region of South West Queensland, Australia.

St George is on the Balonne River which is reputedly an excellent fishing site for fish such as Yellowbelly and Murray Cod.

The town was named by Major Thomas Mitchell who crossed the Balonne River on St George's Day, 23 April 1846. 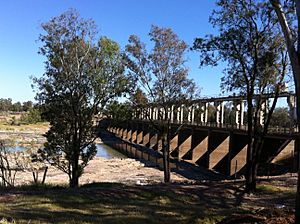 Flooding once again occurred in February 2012. When there was a possibility of the river reaching 15 metres, about 2000 residents were mandatorily evacuated on 4 and 5 February to evacuation centres in Dalby and Brisbane. A temporary levee was built in St George on the morning of 5 February (Sunday). The Balonne River reached a height of 13.85 metres on Tuesday 7 February.

St George has a public library, visitor information centre, cultural centre, swimming pool, showground, bowling and the St George Golf Club.The address of the golf club is Wagoo Road. It was opened in 1948. The town also has an airport, St George Airport.

The St George show is celebrated every year over the Labour Day long weekend (weekend of the first Monday in May), Everyone is encouraged to go and locals have a great time sharing stories at the bar and watching the rodeo.

All content from Kiddle encyclopedia articles (including the article images and facts) can be freely used under Attribution-ShareAlike license, unless stated otherwise. Cite this article:
St George, Queensland Facts for Kids. Kiddle Encyclopedia.