Shire of Balonne facts for kids 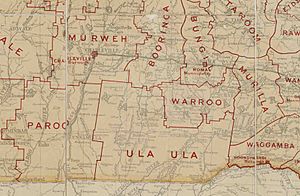 Ula Ula Division was created on 11 November 1879 as one of 74 divisions around Queensland under the Divisional Boards Act 1879 with a population of 1271. The name Ula Ula is believed to be derived from an Aboriginal word meaning water lilies. or ripples on water

A separate municipality, the Borough of St George was gazetted on 31 July 1884, but on 13 March 1886 it was abolished and amalgamated back into Ula Ula Division.

On 11 March 1903, Ula Ula Division was renamed Balonne Division after the Balonne River. The name Balonne is believed to be of Aboriginal origin meaning water or running stream.

With the passage of the Local Authorities Act 1902, Balonne Division became Shire of Balonne on 31 March 1903.

The Shire of Balonne includes the following settlements:

All content from Kiddle encyclopedia articles (including the article images and facts) can be freely used under Attribution-ShareAlike license, unless stated otherwise. Cite this article:
Shire of Balonne Facts for Kids. Kiddle Encyclopedia.